Worldwide, black and white rhino populations are under serious threat due to poaching and in South Africa the situation is no different. Rhino poaching continues to be driven by the demand for rhino horn in Asian countries where it is used in traditional Chinese medicine and for ornamental purposes as a symbol of success and wealth.

We at HESC have experienced the cruelty of poaching first-hand. Already in 1994, two beloved rhinos, Ronnie and Lahliwe, were killed by poachers on a neighbouring property. The two rhinos had been hand-reared at HESC and when old enough were released in the reserve. Since 2013 we have treated and rehabilitated 13 rhinos of which ten have been released back into the wild, where we believe they belong.

While it is our passion and privilege to rehabilitate poaching victims, the financial burden is great. Veterinary costs, food, shelter and security require a level of funding that we struggle to provide. Fundraising initiatives, that include the opportunity to foster rhinos and make donations, enable us to continue with our conservation work to help ensure the future of these iconic animals. Funding is also received from the Wildlife Conservation Trust, established by a deed of trust in 2015 to source funding for the conservation, research and education programmes of HESC.

Our Species
MAKE A DIFFERENCE 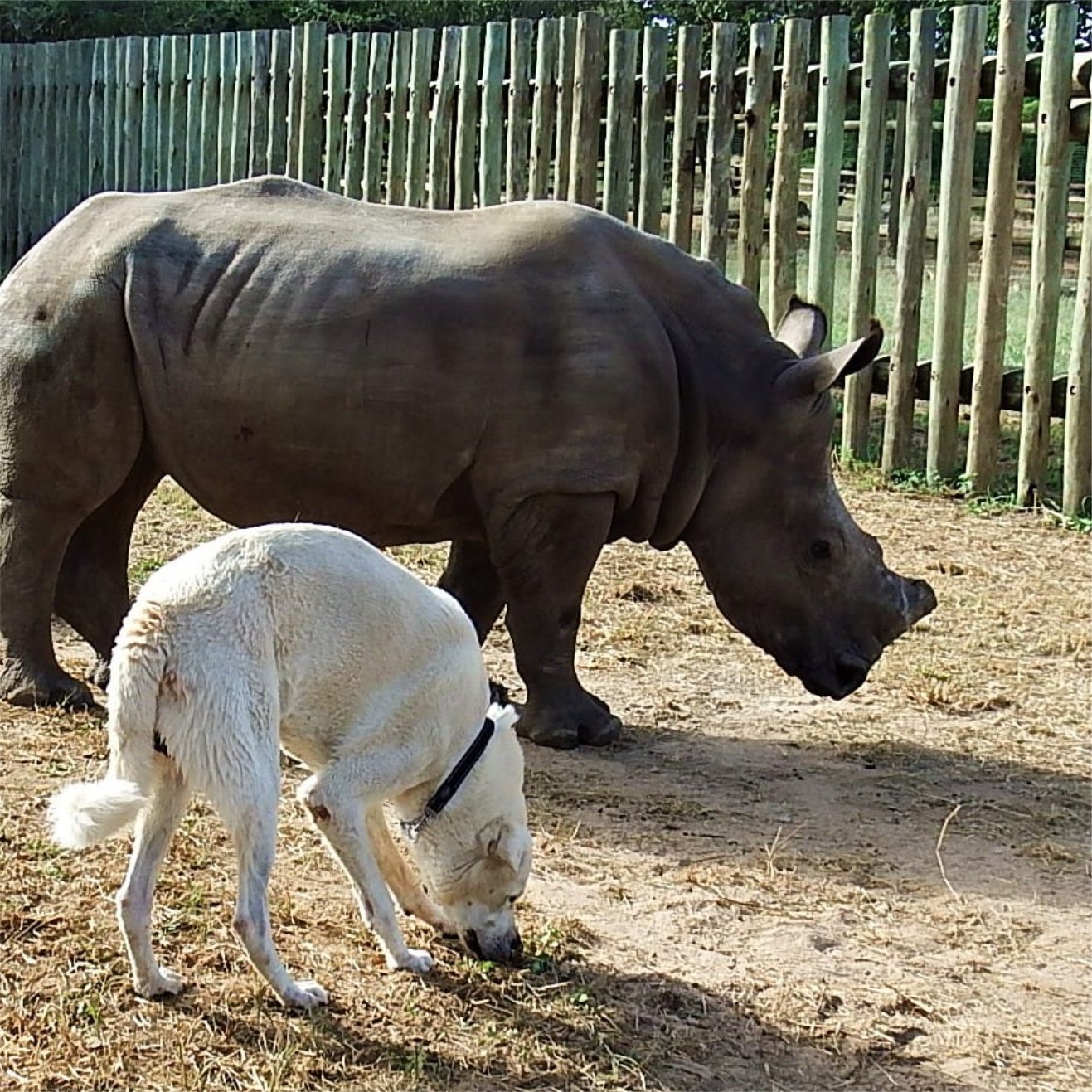 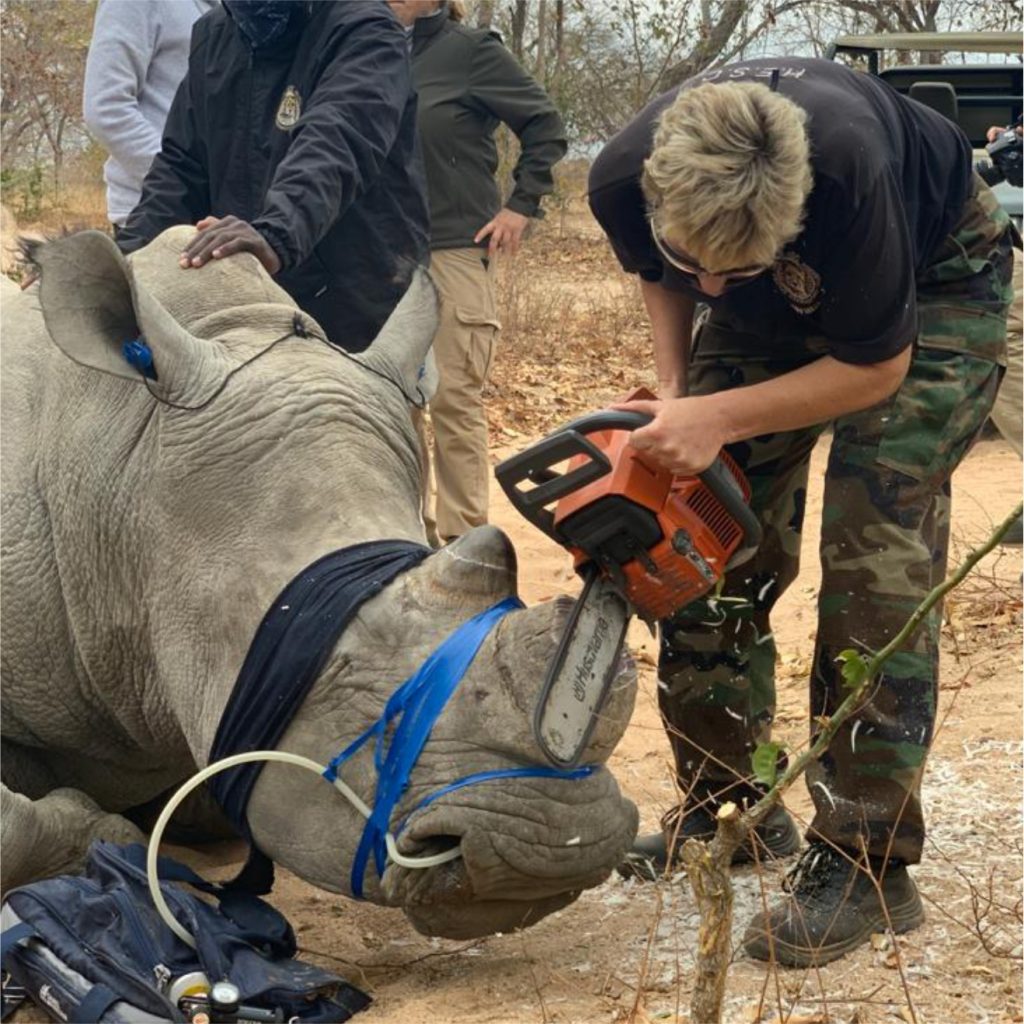 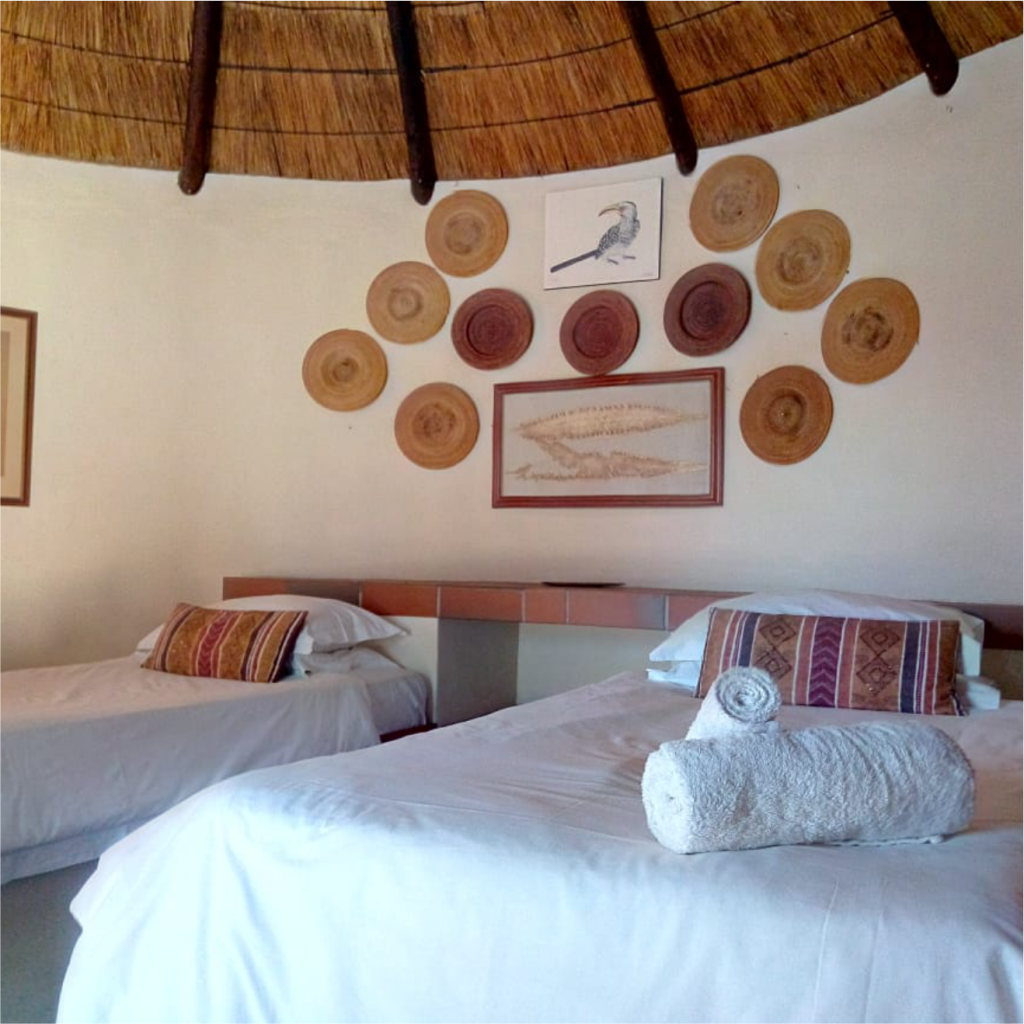 Every Cent Counts. there is no contribution too small!

Rhinos rehabilitated at HESC have included animals injured and orphaned in poaching incidents as well as Esme, our beloved mascot, who would not have survived if we had not taken her in as her mother could not produce sufficient milk to sustain her young calf. Their stories are mostly heartrending.

On 30 August 2013, when a reserve close by discovered that poachers had brutally attacked and dehorned three of their rhinos, we immediately stepped in to offer our expertise and a home for the treatment and protection of the two female rhinos that had survived. Sadly, the bull was not as fortunate.

Dingle Dell and Lion’s Den arrived severely maimed and barely alive. With gaping holes where their horns had been hacked off and their sinuses exposed, extensive treatment over a period of three years not only saved their lives, but resulted in pioneering procedures being developed that would serve as the blueprint for rhino rehabilitation in the future.

IN DECEMBER 2018 THESE TWO VICTIMS WERE RELEASED AS TRIUMPHANT SURVIVORS BACK INTO THE WILD.

Orphaned (in separate incidents) when their mothers were killed for their horns, the two traumatised youngsters were brought to HESC.

Gertjie was found in May 2014 next to the lifeless body of his mother who had been poached for her horn. He was barely three months old at the time. At HESC he was hand-raised with love, endless patience and the companionship of a Pedi lamb called Lammie and could later offer comfort to little Matimba who came to HESC six months later when he was just a month old. He too had been found next to his slain mother who had been enjoying a mud bath with her son when the fatal attack occurred. The two rhinos formed a close bond with Gertjie assuming the role of big brother.

Because of their close relationship, Gertjie and Matimba were released together in July 2019.

Ike and Phillipa also came to HESC after poaching incidents left them severely injured. Their story is another triumph over adversity and a heart-warming love story. Ike had his horn hacked off as a young bull of around three years old and was rehabilitated at the Pilanesberg National Park & Game Reserve. He was later brought to HESC by Saving the Survivors to be with other rhinos that had lost their horns. Understandably terrified and nervous in the extreme when he first arrived, he only relaxed after he met Phillipa in an adjacent camp who had experienced an equally horrendous poaching attack on her and her mother. The two-year-old Phillipa survived, but not the mother.

Because Ike and Philippa became inseparable while they were at HESC, they were released together in August 2019.

Olivia arrived in April 2016 as a little four-month-old, scared and alone. She had witnessed the savage killing of her mother and was found next to the butchered carcass, orphaned by the heartless actions of ruthless rhino poachers. It took a while for the terrified little one to settle down, but she eventually did, making friends with other orphaned rhinos, including Khulula, Nhlanhla and Lula.

Olivia was released back into the wild in September 2019. SHE WAS KILLED IN A POACHING INCIDENT IN MARCH 2021.

Stompie has a story even more horrific than most. As an eight-month-old calf he lost his mother in a violent poaching incident. When the little guy was eventually found next to his dead mother, all but dead himself, his tail had been bitten off and his rectum chewed by presumably a hyena. Numerous treatments saved his life and restored his dignity. Balu arrived when he was only two weeks old and weighed barely 50 kg. He was not a poaching victim but had lost his mother in a hailstorm. About seven months younger than Stompie, the two are best mates and their favourite pastime was taking mud baths together.

Stompie and Balu were released back into the wild in October 2020.

Nhlanhla came to us at the age of only one week because his mother, an old cow, couldn’t produce sufficient milk to sustain him. He came as a skinny, frightened little thing, but responded well to the love and three-hourly bottles of milk he received at HESC. He was the youngest bull at HESC and with time became much calmer than the spirited little one that he was, although he always liked to go exploring.

He frequently wandered away from his lady friends, Lula, Khulula and Olivia, just to see what he could find elsewhere. He really enjoyed his mud baths and would often be found lying there most happily.

Nhlanhla was released back into the wild in December 2020. 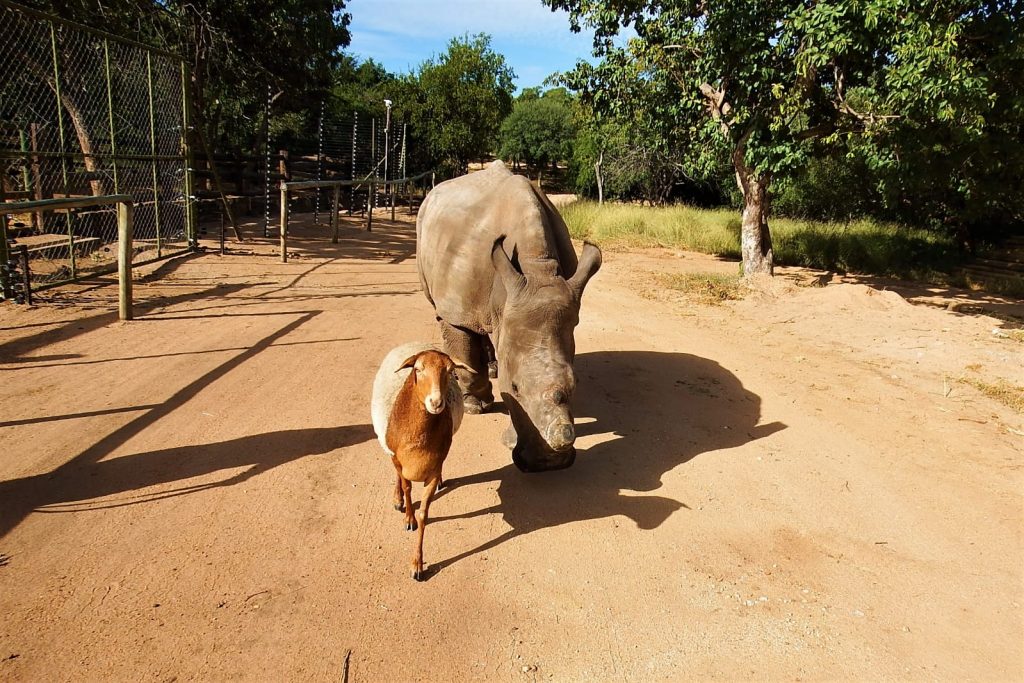 Lula arrived at HESC as a terrified four-month-old who had witnessed her mother being killed by poachers but was fortunately unharmed herself. Although understandably restless when she arrived, she eventually calmed down when she met the orphans Nhlanhla, Khulula and Olivia at the fence of their boma. The orphans bonded immediately and have since spent much of their time together with Lula now the feisty leader of the crash. 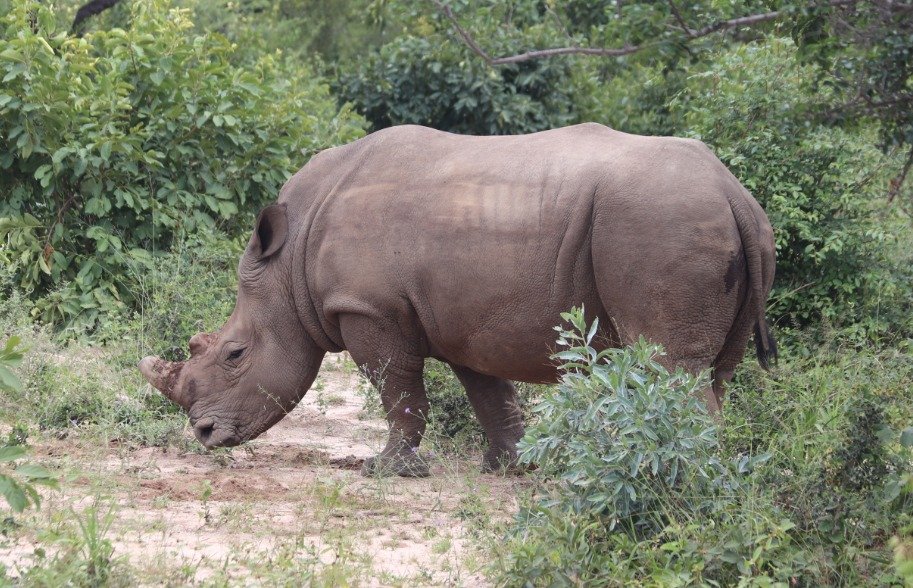 Khulula was found smeared in blood next to the carcass of her slain mother. It is thought the poachers must have been disturbed as the mother’s horn was still intact. Approximately five months old at the time, Khulula was aggressive and skittish for a long time. Our curators’ endless patience and being paired with Olivia, another orphan who lost her mother, finally calmed her down. Today, she is content and peaceful. 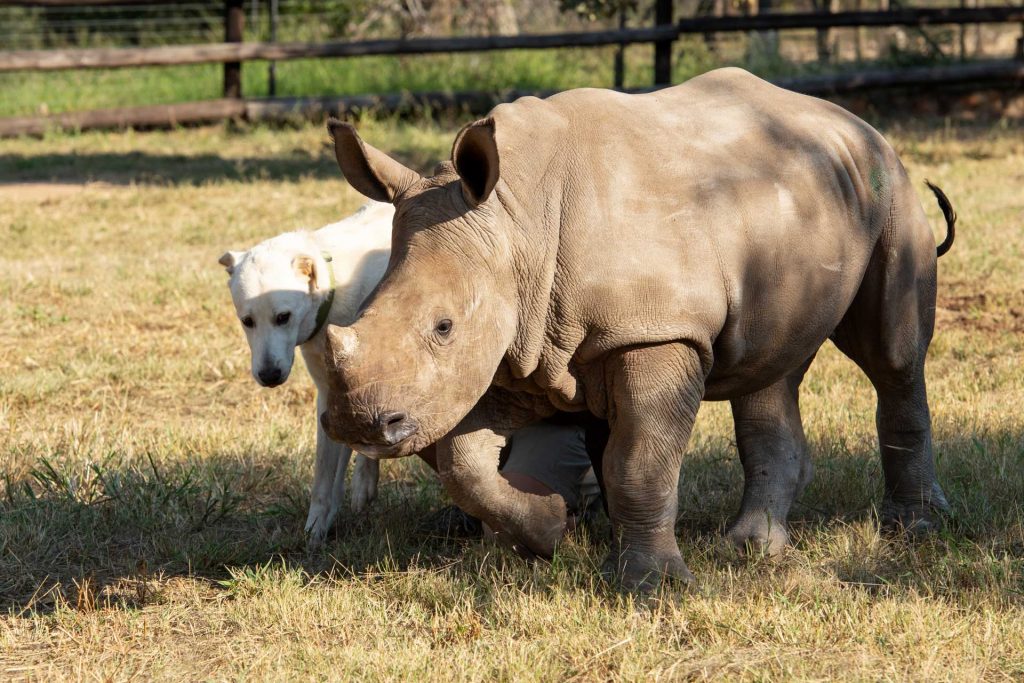 Esmé came to us in Oct 2017 when she was not yet one month old because her mother couldn’t produce enough milk and it was feared the young calf wouldn’t survive. Three-hourly bottle feeds soon revived her and she is now the epitome of good health and has become the darling of HESC. Her close friendship and playful sessions with David the Anatolian shepherd dog and Mielie the Thaba Manzi Pedi sheep have become part of the daily routine at HESC. Their boisterous escapades have frequently been screened in the local and international media and on social media.