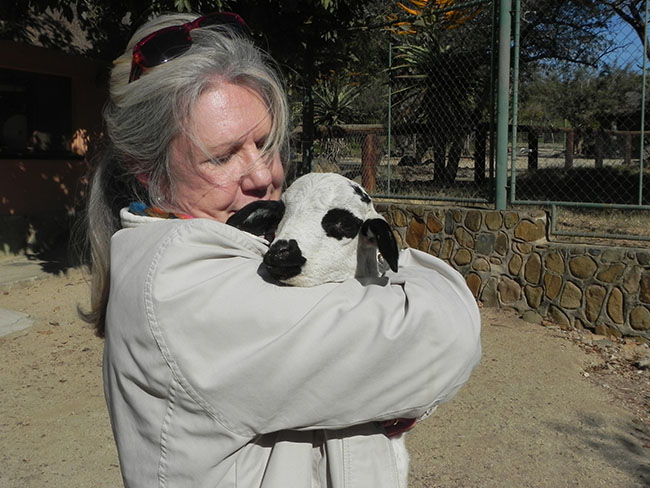 It is with great sadness that we must announce the death of our beloved Driesie. The little black and white Damara lamb arrived at the Centre on the 8th of July, as a companion animal for Gertjie. Born on the 31st of May, he was only about a month old on his arrival. After a nationwide search for a hand-reared lamb, we found him on a farm in Heidelberg, Gauteng. We quickly made plans to transport him to HESC, where we began the process of bonding him with Little G. We were feeling extremely positive and excited about his relationship with the baby rhino!

However, we were faced with a problem – the little lamb did not arrive with enough milk to ensure gradual change over to a new milk formula.  Since his previous milk formula was not available here, we had no choice but to place Driesie on a new milk formula the morning after his arrival. Any change in diet for an animal should be gradually introduced, and the quick change in diet caused Driesie to get diarrhoea.

Unfortunately, when Driesie arrived at the Centre, his body condition was already poor. We put him on electrolytes – standard treatment for diarrhoea – but because he was thin and weak his body could not sustain him. It is really difficult to bring an animal back into balance once his whole system is out of balance, and Driesie only became weaker. We rushed him to our local veterinary clinic, where he was treated with a heated saline solution as well as Bco, B1 and B12 injections. Despite our efforts, Driesie died during treatment.

We all grew extremely fond of Driesie during the time that he was with us, and he will be sorely missed.