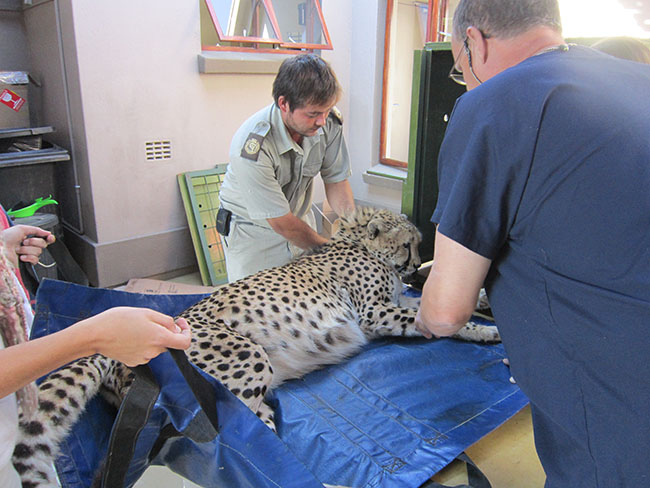 Sheila about to be transported to the hospital

Two weeks ago, Licia and Christo, our animal curators, noticed that Shelia (a female cheetah at the HESC) was limping on and off. As we had planned to use Sheila in our lure programme to encourage natural cheetah behaviour, we decided to check her out to see what was causing her to limp.

What we thought was just an overgrown nail, turned out to be a deformed nail bed, causing the inside nails on both of Sheila’s back legs to grow through the bottom of the foot pad instead of from the top. It would be like our big toe nail growing through the bottom of our toe! Effectively, Sheila was walking on her nail bed. 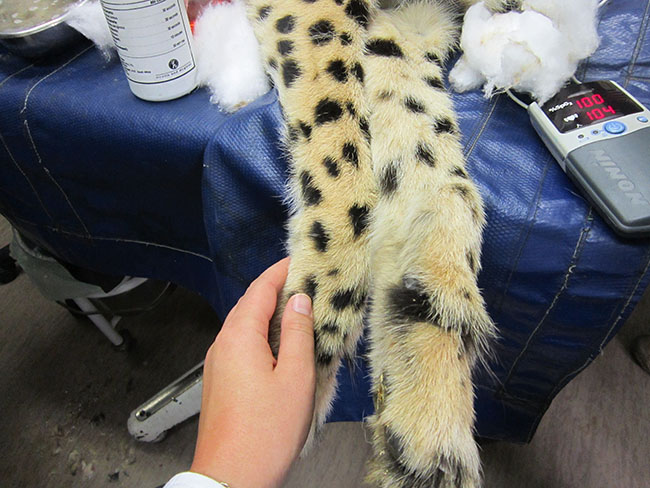 After much deliberation, and the notation that no amount of nail trimming would eliminate her pain, the decision was made to amputate the affected area, as Sheila was also showing signs of arthritis thus affecting her quality of life. As the comfort, health and happiness of our animals are our main priorities, we wanted to ensure that Sheila would receive the best possible option in the situation. Her toes were amputated two weeks apart to ensure that she didn’t have two sore paws at the same time. She has now completed her surgery, and is back at the Cheetah Centre resting comfortably. She is on antibiotics to ensure that she does not get an infection, as well as a course of painkillers to manage her pain levels. Sheila will be carefully monitored during her recovery process, and we will continue to make sure that we do everything we can to keep her comfortable during this time.

As to why Sheila ended up with this condition, we are not one hundred percent sure yet. But, because Sheila was the only cub in her litter, we do not know if it is a hereditary condition or simply a genetic fluke (which also happen in humans and domestic animals too). Either way, it was causing her a lot of pain!

Worldwide, the genetic diversity amongst cheetah is very limited, and this increases the chances of recessive issues being passed on. This may have been a contributing factor. If it was a hereditary condition, this means that it was directly passed on from her parents. If, however it is a congenital defect, this means that it was present at birth, but was an abnormality that developed on its own during the foetus stage in the uterus. However, some abnormalities are not present at birth, but rather develop at a later stage.

We will continue to monitor Sheila on a daily basis, and will all make sure that she has just as much fun as any other cheetah in our care.