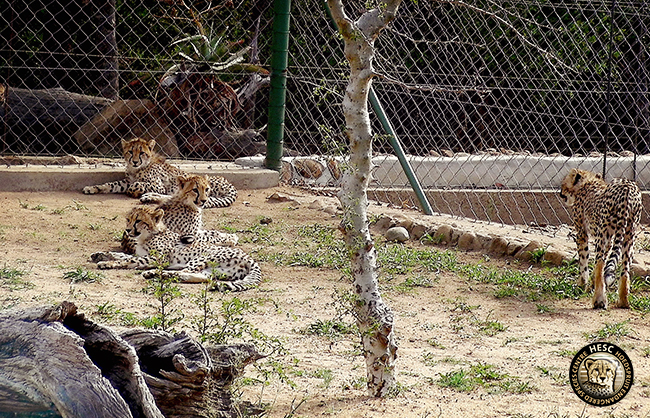 In the past week we had a few visits from Dr Rogers and his assistant, Janelle Goodrich, to take DNA samples from 12 of our cheetahs, including Shelly’s 8-month-old cubs.

Dr Rogers used BAM to dart the cheetahs, and it worked very well. BAM is a patented, unique and safe anesthesia combination of Butorphanol tartrate, Azaperone tartrate and Medetomidine hydrochloride. Click here to read more on the BAM research that was conducted at the centre earlier this year. 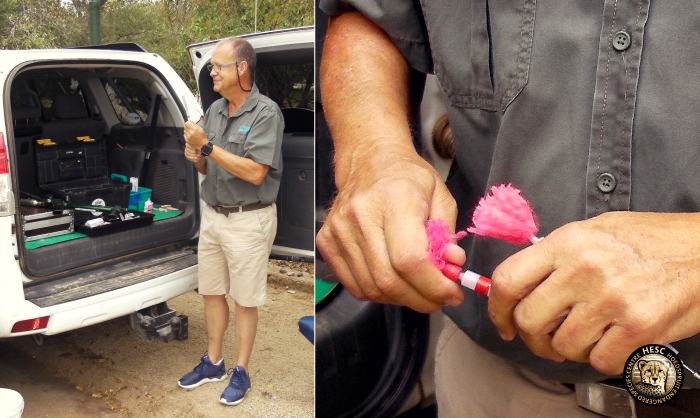 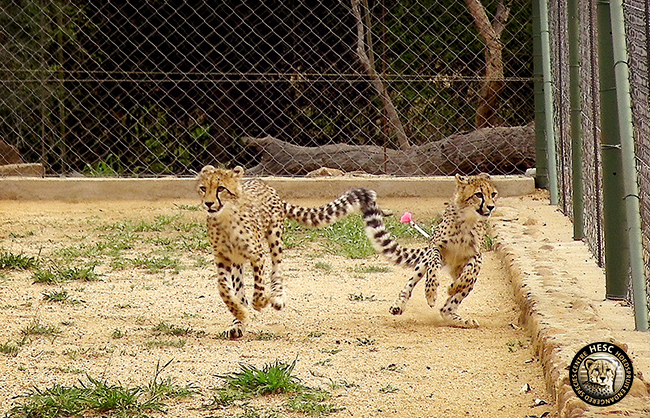 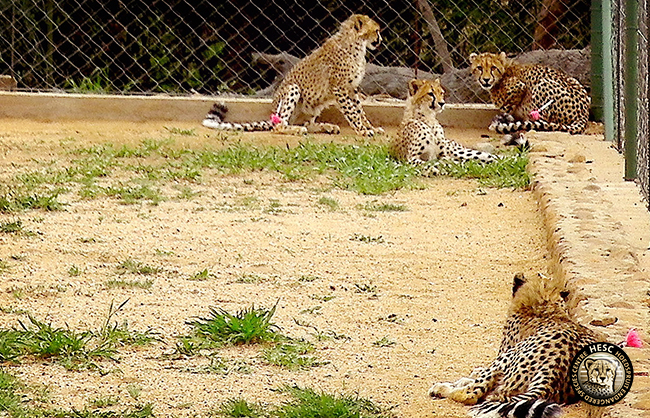 While the animal is anesthetized a towel is placed over the eyes to keep direct sunlight out and prevent stress. Ointment is also put in their eyes to keep the cornea moist.

This was also a great opportunity to check for parasites and anything else that could be of concern. Fortunately, all four of Shelly’s cubs were found to be in great health. Penicillin injection was administered to prevent any possible infection from the dart and a catheter was inserted into the lateral saphenous vein in the hind leg. The catheter provides an immediate intravenous route for the administration of drugs, fluids, etc. or for blood sampling in the event of an emergency. 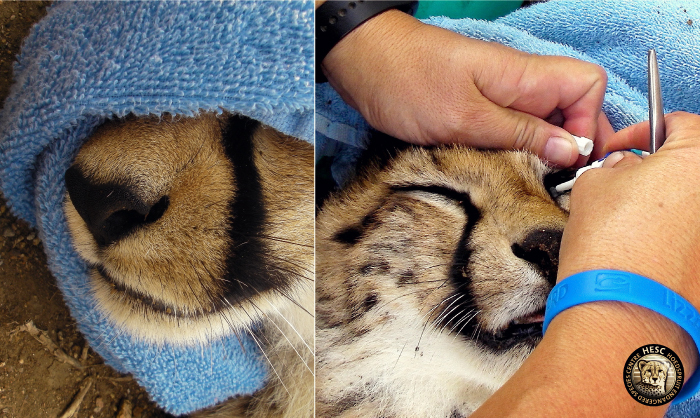 Ointment and covering of eyes 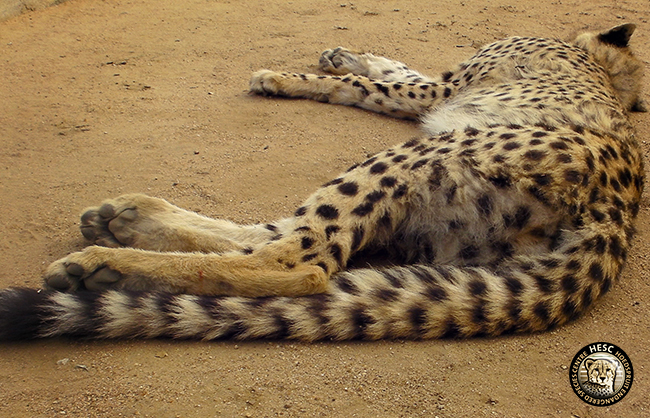 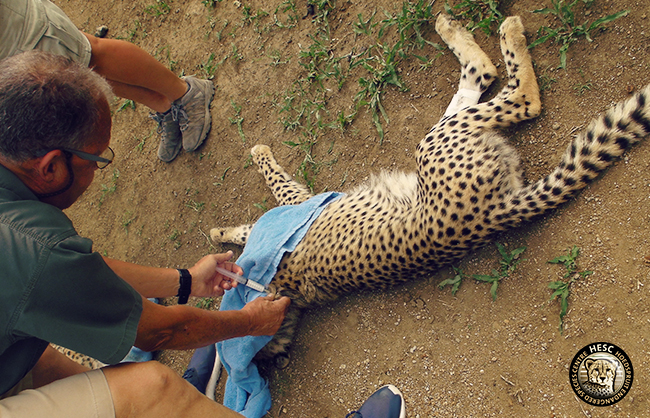 For each cheetah’s profile Christo, HESC’s head curator, measured the length of the cheetah’s body parts as HESC curator, Linri, filled in the information on the ‘chain of custody’ data sheet.

DNA samples were collected through oral and rectum swabs. Hair and blood samples were also taken. The samples were placed in small separate plastic containers and zip bags, and sent to the National Zoological Gardens. 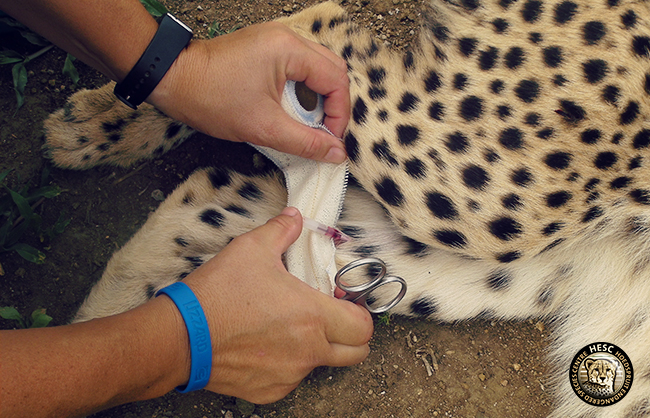 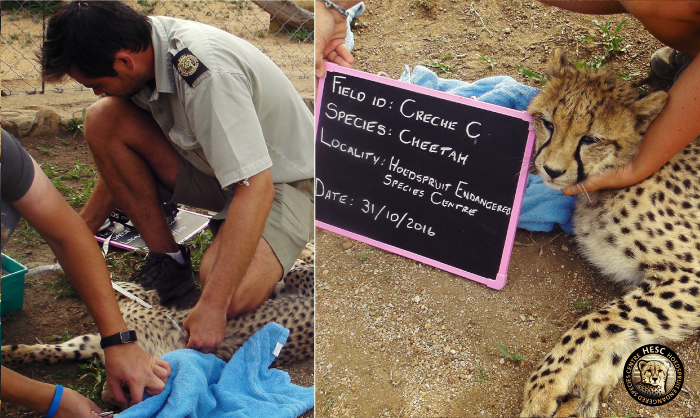 As part of the National Research Foundation’s two-year bilateral agreement funding platform, the National Zoological Gardens of South Africa (NZG) and the Cheetah Conservation Fund (CCF, Namibia) have teamed up to investigate the pathology and potential genetic basis of oxalate nephrosis in cheetah. CCF is the world’s leading organization dedicated to saving the cheetah in the wild and maintains a research program on the biology, ecology and genetics of cheetahs. 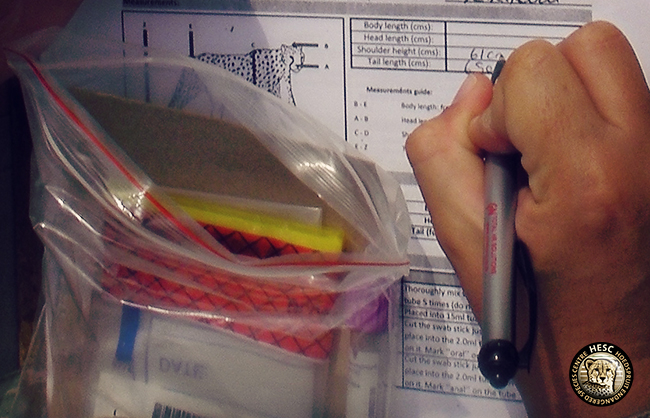 Collection of data and samples 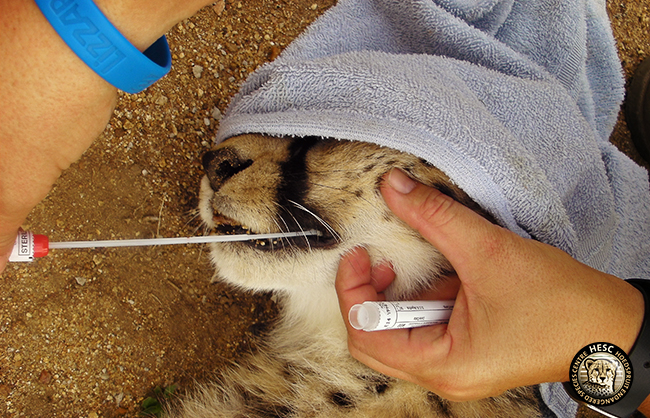 To compliment, the NZG has a well-established and renowned research department that undertakes strategic, innovative and interdisciplinary research to contribute to viable wildlife populations within the biodiversity conservation landscape.

The DNA profiling cost HESC around R1600 per cheetah, which totalled to R19 200 for all 12 participating cheetahs. It is worth every cent as this DNA profiling plays a vital role in the cheetah’s survival. The DNA profiles also get stored on the cheetah database that was established by a collaborative team coordinated by the National Cheetah Conservation Forum of South Africa. 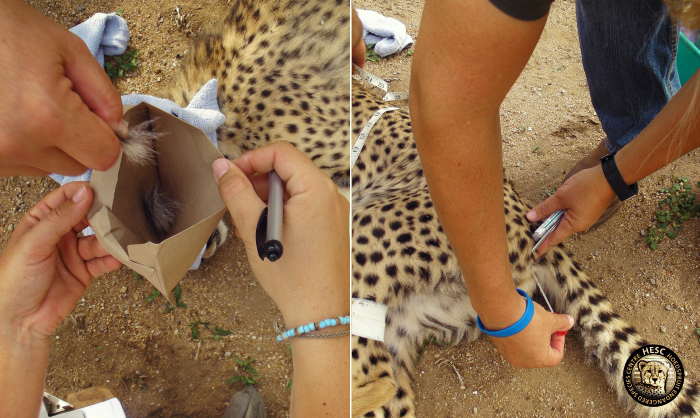 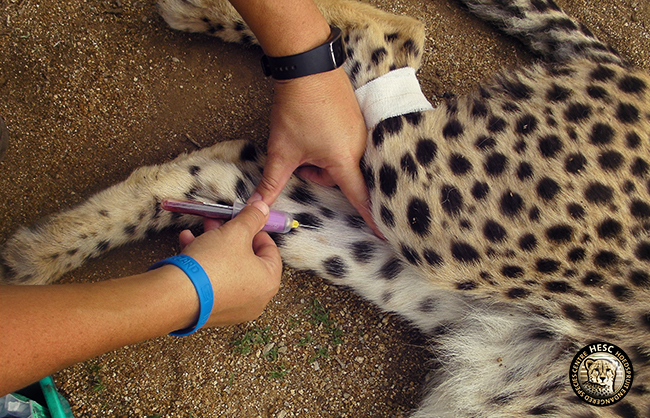