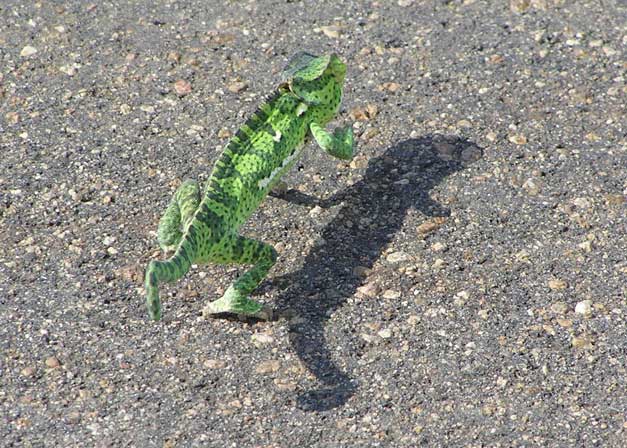 With winter fast approaching, and the lovely green bush that is synonymous with summer slowly disappearing, there are other things to forward to! Like being able to drive a little bit faster! Reptiles are abundant during the hot months – especially chameleons – so we have to drive slowly and carefully in order to avoid squashing these colourful creatures that cross the road without a care in the world our large safari vehicles! Their camouflage works unbelievably well too, making it difficult to spot them until you’re almost on top of them! But they do add an exciting twist to our tours, with the ranger excitedly jumping out of the vehicle and running to rescue the chameleon from certain death and then releasing it back into the wild!

Okay, so we’re exaggerating a little!

We do, however, use the opportunity to educate our guests about the wily chameleon. Giving them the chance to see its amazing colour transformations up close, and then letting the invariably indignant creature scuttle off into a nearby tree.

The fellow in the photo is a Flap-necked chameleon, and the reason why one finds so many of his kind on the ground is because that’s exactly where they lay their eggs! The females use the flap on their necks to push away sand in order to create a hole to lay their eggs in.

The chameleon’s famous ability to change colour is controlled by its nervous system, where special cells called “melanophores” are flooded with melanin. Contrary to popular belief, chameleons change colour in response to mood or temperature stimuli and not as a means of camouflage. The fact that they’re difficult to see is just a handy side-effect, or not, depending on their current disposition.

Hopefully these ever changing reptiles and the eggs they’ve laid will survive winter, so that we can see them and their youngsters in spring.

What's been going on: May/June