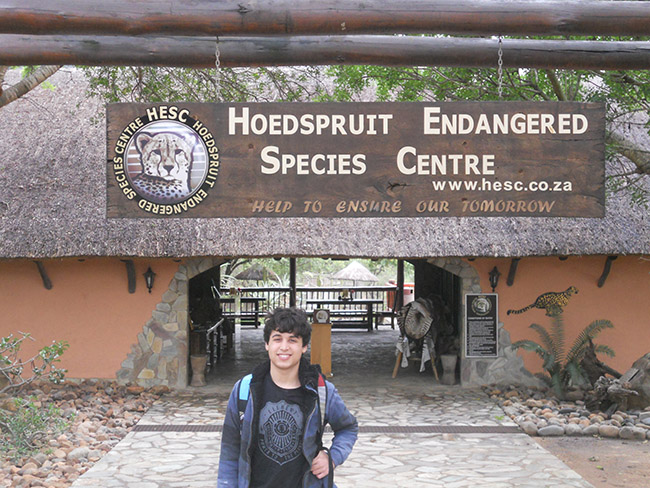 This was the last intake for the Student Programme for 2012, and we only had one student. Here he introduces himself:

My name is Joao Victor Alverenga from Brazil. I’m an 18-year-old who’s passionate about animals and would like to become a biologist.

For the past few days at the Hoedspruit Endangered Species Centre (HESC) I’ve done quite a few interesting things, like taking Mary-Jane, a cheetah cub, to the vet to have her bandages changed. I have also observed Dr Rogers, the vet, move two male lions to a different enclosure.

Apart from all the hard work, I’ve also had a fun time and have been on exciting excursions like the boat trip at the Blyde River Canyon, and the game drive at the Kruger National Park where I saw lions, hyenas and wild dogs.

I also went on a game drive on the Kapama Reserve, and it was awesome to see lions again. This morning I went on an Elephant Back Safari at Camp Jabulani. What a marvellous way to end the week!

Of the many things I’ve learned during my week at HESC, the best was a trick on how to sit on the ‘bakkie’ so that I don’t feel the discomfort of the bumps as the vehicle moves around. Spending time at HESC, feeding and watching different kinds of animals – including cheetahs, wild dogs, vultures, the small cats and lions – has been absolutely fascinating. Being at HESC was such a privilege and an experience I will never forget.

US Friends of HESC – Update

The power of one is boundless