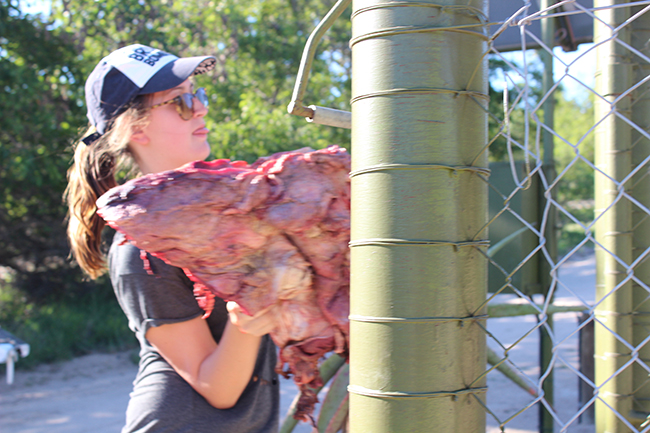 Lara about to feed the lions

We had only one student for this intake, and she was with us for the full duration of the student programme. Here she introduces herself:

Hi my name is Lara Luchowicz, I’m 18 years old and come from Switzerland, although my nationality is Belgian. I’ve just finished high school and decided to take a gap year to do some volunteering and internship. I love travelling, animals and small kids.

Since my arrival at HESC I’ve had the opportunity to see and do many things as a student. On Thursday 8 November I went with MaryJane, one of the young cheetahs, to Dr Rogers to have the bandage on her hind right leg changed. The following day MaryJane had to go back to the vet as her leg was swollen. Dr Rogers decided to stitch the wound. The little surgery was very interesting to watch, and gave me a chance to ask many questions. I also had the opportunity to help during the procedure, which wasn’t an easy task. 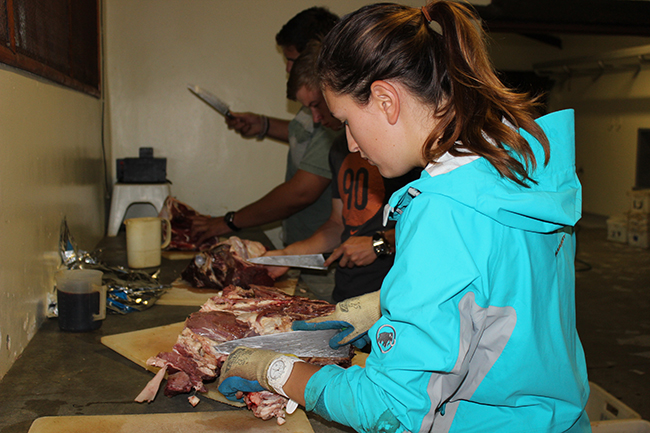 Lara in the butchery

On Tuesday 13 November Dr Rogers came back to check on Mary Jane, and at this point her leg seemed to be healing well. Dr Rogers was also at the Centre to see Piet, one of the male lions. Piet had an abscess in his mouth, and I helped Dr Rogers to clean it. Piet had also lost a lot of fluid and was suffering from dehydration. He was then put in hospital where a course of antibiotics was to be administered for nine days.

My schedule at the Centre was pretty much the same. Every Monday, Wednesday and Friday I would leave the camp at 6 am to go to the butchery to feed the cheetahs. This was one of the harder tasks, and sometimes took up a lot of time. Feeding time would start at 9 am, and I would have to carry the meat from the truck to every enclosure. 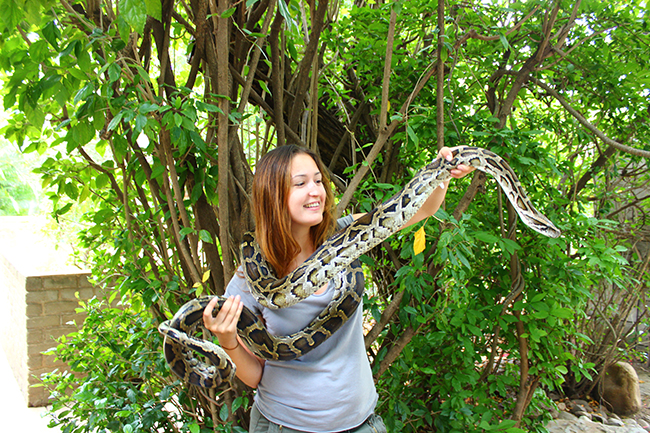 Lara playing with a phython at Khamai Reptile Park

On Mondays and Fridays we would also feed six lions. November 12th was an especially hard day, as we had to do ‘dipping’ while feeding the cheetahs. I had to spray each of the cheetahs with some chemical for ticks. Every afternoon we’d feed the small cats and the cheetah cubs, the birds and other animals like the genets and tortoises. My days usually finished at 5 pm, at which point I’d be very tired, and would go to bed early. On Thursday mornings the meat truck would arrive and we’d have to offload the meat. Every morning and evening I also had to feed the four little animals that we had at the camp.

Apart from all the hard work, I also got to do fun activities. I went on a game drive with two of the guides and other guests. This was quite an adventure, as we got to see leopards and other wild animals. I also went on a boat cruise on the Blyde Canyon River and got to view the most breathtaking landscape and had some time to relax. Although it was my off day, on one of the Sundays I volunteered to help at the Centre, and I went to see the release of a caracal on the Kapama Reserve. We also visited the Reptile Park where I got to hold a python and a big spider. It was so much fun! 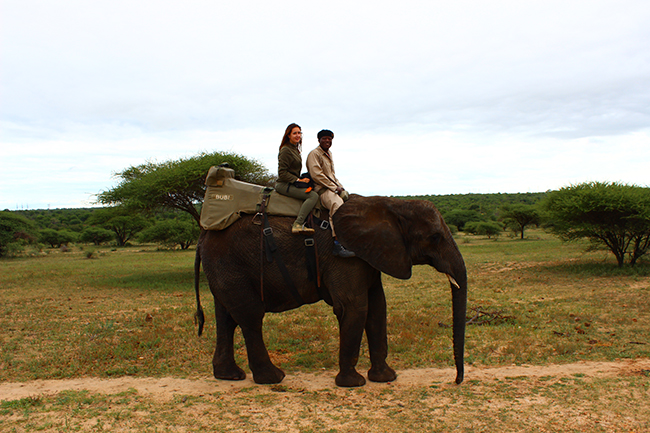 The last week of my trip was as good as the beginning! Karen and Tabs took me to the Kruger National Park. We didn’t see a lot of animals, but we did manage to see the buffalo, giraffe, zebra, impala, some pretty birds and a jackal. We then enjoyed a nice brunch at a picnic spot, and enjoyed the wildlife around us.

On a Thursday morning I went on an elephant-back safari at Camp Jabulani. I rode on the back of Bubi, a 23-year old female elephant. I learned a lot about elephants and realised how amazing and wise these animals are. One morning just before going to the butchery, I got to see rhino right next to the camp. What an amazing sight!

I also went on a four-hour walk in the bush with the anti-poaching unit to watch them train how to track poachers. The six young men took turns to hide, and the rest would have to look for them. It was very interesting to see how they work and manage to track poachers in the wild. 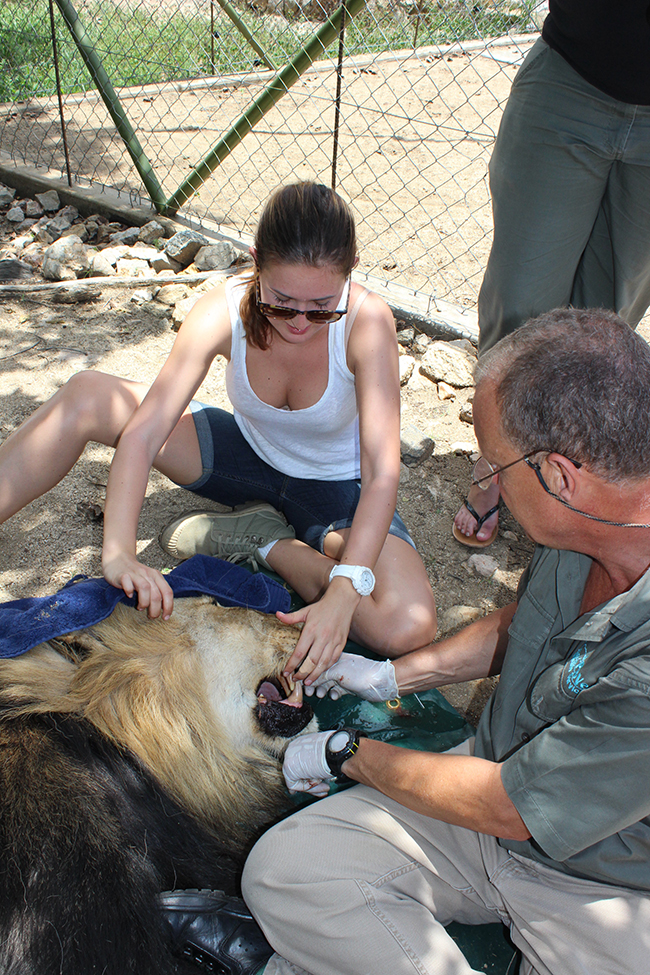 In my last week at the Centre, Dr Rogers came to check on Piet again. You can find an update on Piet on Facebook and the blog about Our very own Lion King – Piet. MaryJane also had another check-up and Dr Rogers confirmed that her wound was healing as it should.

My three weeks here at the Centre were an experience that I won’t forget. I saw and learned many new things, and I loved being involved in the daily care of the cheetahs and other animals. What a great life experience it’s been, and I would recommend it to anybody who loves adventure and animals!

Click here to read more about the Student Programme at HESC.