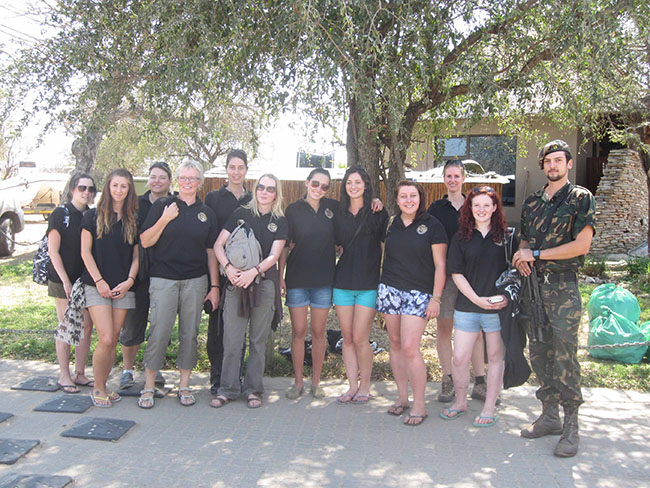 The third week started with an exhilarating episode. We had to capture, rehabilitate and release an elephant shrew. On my way to the bathroom this morning, I noticed one of the cats, Chippie, had a mouse in his mouth and didn’t think much of it as this is normal cat behaviour. But Andrea actually noticed something I hadn’t. What seemed to be a mouse was actually a one-of-a-kind and endangered elephant shrew! Luckily Andrea managed to save it from the cat’s claws. Nina, the vet, was called in to give the elephant shrew a health check. All was fine, so Nina decided that it should be released back into the bush. We drove away from camp and Andrea had the honour of releasing the shrew. Capturing, rehabilitating and releasing done! It felt great! 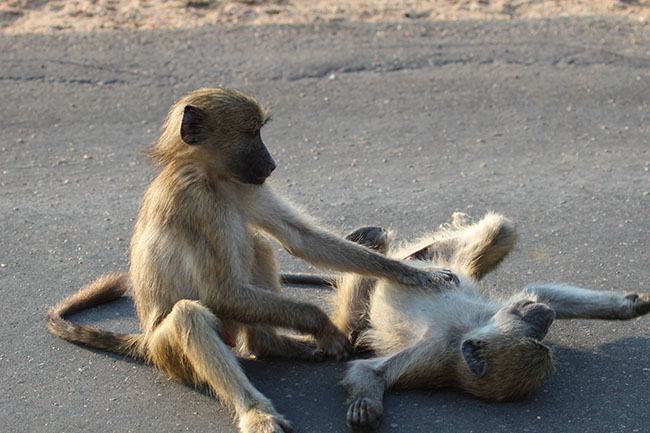 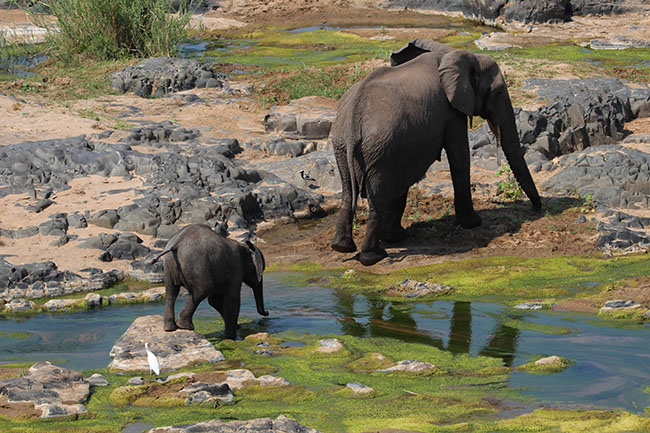 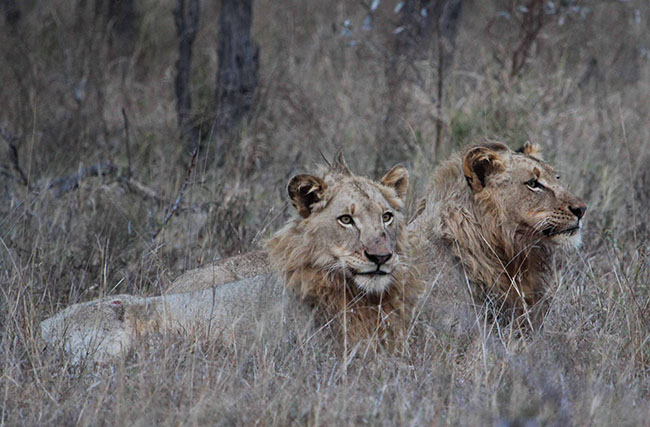 On Saturday 24th August we had a very early start, leaving HESC at 5am for a day in Kruger National Park! We had not even paid our entrance fee yet and were already met by the most amazing sighting of four lions on a kill, and hyenas trying to get what was left of it; but then the lions chased the hyenas away. We also saw lions playing with one another, and vultures being chased by hyenas. What an exciting way to start the morning! We also saw impalas, zebra, wildebeest, spoonbills, crocodiles, playful baboons and so much more. And to top off the bill, on our way out the same four lions we had seen in the morning were sitting right by the road posing for us. What a wonderful day! By the time it ended, everyone was exhausted. 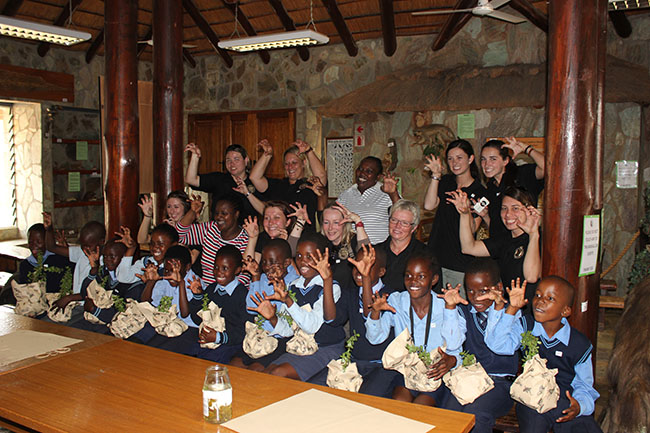 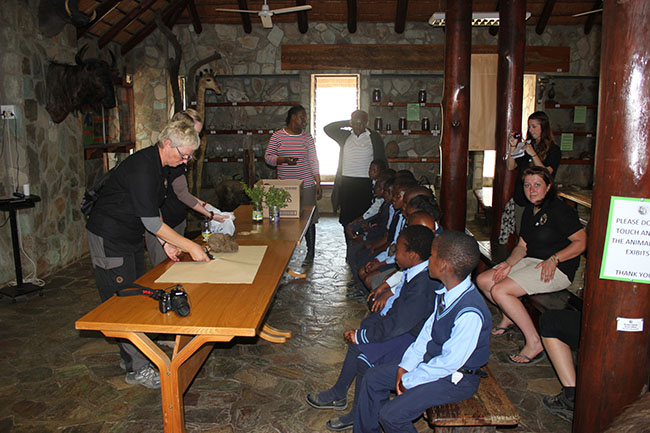 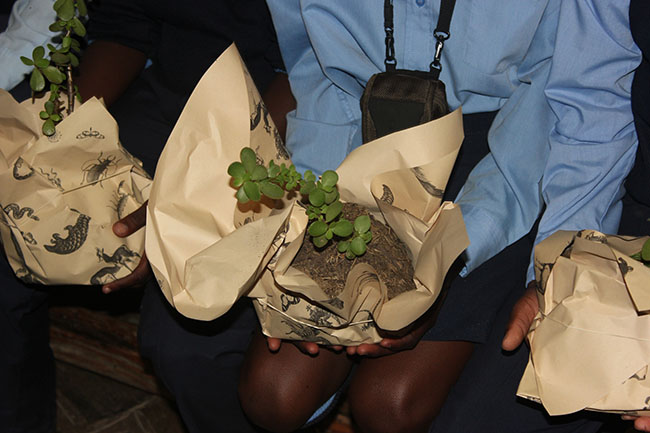 On Monday, we welcomed twelve grade 4 learners from the Paulos Ngobeni Primary School and HESC sponsors who’d come to visit the Centre. We walked them around to see various animals that are housed at the Centre – including cheetah, caracal, wild dogs, ground hornbills, lions and others. The learners had the opportunity to feed the tortoises, and they watched the ground hornbills being fed. After the tour we went back to the Lente Roode Education Centre, where we showed them how to plant a little tree in rhino dung, and adding some fertiliser to it. The children took them back to school, and each learner will have to care for their own little tree.

On Tuesday we visited Pro Track anti-poaching unit. Participants take part in a very tough 35-day training programme, where they are taught how to hunt down rhino poachers. Unfortunately not everyone makes it through the programme. The rhino situation in SA is dire! Over 600 rhinos have already been killed this year. Thank God there are organisations like this to protect the precious wildlife!

A beautiful surprise awaited us in the afternoon. We went out on a game drive in Kapama and had a nice sundowner.

Wednesday morning we had butchery at 6am. It’s not the most glamorous of jobs, but one’s gotta do what one’s gotta do! The cats and dogs need food. We had a quick coffee and breakfast at the camp, and then off we went for the big cat feed. I love this job, it is good exercise! We also fed the wild dogs, but only four out of five came for feeding. We drove around camp a couple of times, but the alpha male did not show up.

In the afternoon we picked up bones and filled the water troughs.  Around 4pm we all went to look for the missing wild dog. The group split in pairs and walked through their camp. Quite an adventurous task as we were walking in very dense bush (housing snakes and a rather aggressive resident warthog). Tabs found the Alpha male, but he was unfortunately dead. At 14 years of age, it was not surprising. Sad though. 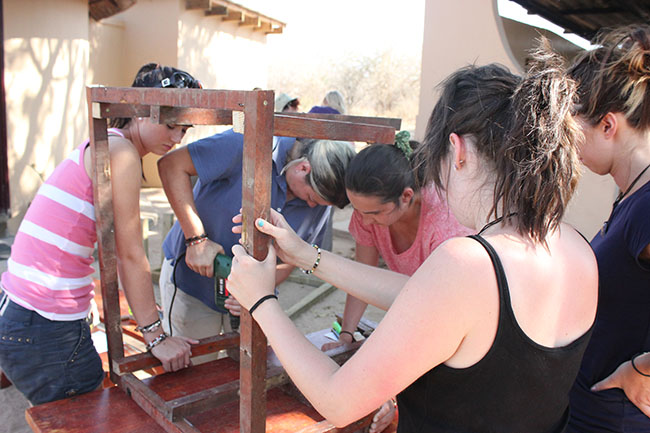 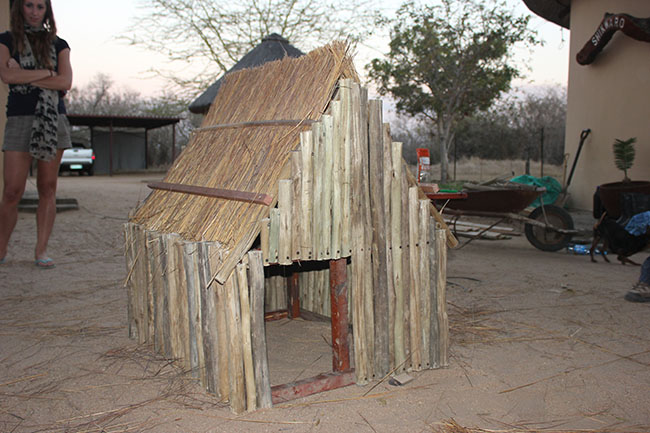 Thursday was a full day at the camp, building huts for the servals and the African wild cats. From scratch! It was a great deal of fun, but hard work with the right tools not always being available. Although we did not finish after a full day’s work, good progress was made. Nina is a ‘tough cookie’ with all the tools, and so our serval house looks the best 🙂

On Friday we were yet again up early, at 5am, for the elephant back safari at Camp Jabulani. It was an absolutely gorgeous morning – a beautiful sunrise, the sun being a big fire ball and the sky filled with soft pink and purple. Nina and I were riding on Lundi, a 23 year old female. She had a male calf of four, let’s call him naughty boy. He was going his own way and investigated my boot with his trunk a couple of times, chasing warthogs, and taking short cuts in the bush. And greedy, still suckling milk from mommy at the age of four! He was adorable to look at! Whenever he fell behind, he would trumpet as loud as he could, but caught up very quickly again with the walking herd! We had a great ride, saw lots of giraffe, waterbuck, warthogs, and impalas. 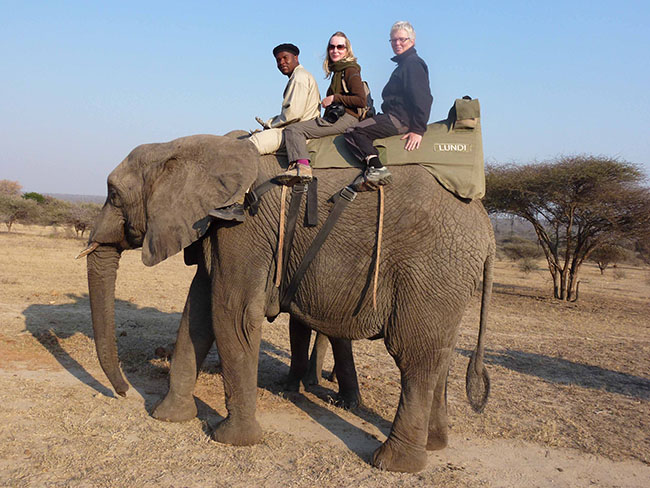 We were back at 9h30. For group A, a rather nasty surprise awaited them as they had to offload the meat truck again! Six tons this time. I felt sorry for the youngsters, but was so glad I did not have to do this again. Our day was filled with feeding antelope and collecting wood for the sleep out. The ‘oldies’ were privileged! In the afternoon we fed the small cats, as well as the vultures, bateleur eagles and hornbills.

On Saturday the whole group booked an early morning game drive on Kapama. The highlight for one of the groups was seeing – for the very first time – a honey badger in the wild! Awesome sighting.

When we came back we then continued working on our serval and African wild cat huts, and I’m glad to say we proudly completed our task. They look very professional! I think we should be hired by HESC now.