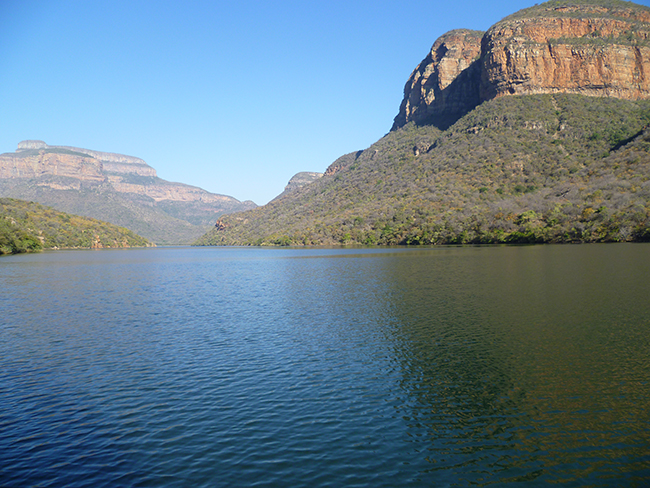 On the first day, everyone arrived and we had some time to get to know each other before we had our first tour through the Centre to get to know our surroundings. We got to see all the beautiful cheetahs, and we were so excited to start working with them. The second day was our groupâ€™s day to do butchery; we had to prepare the meat for the cheetahs and wild dogs, and feed it to them. When feeding, we learnt how the food was given (in the feeding enclosure) and why it was important to do this as it enables monitoring of the cheetahs. We were then lucky enough to watch one of the cheetahs sprinting to a lure. We also had the experience of the vulture restaurant, and saw a phenomenal number of these birds. 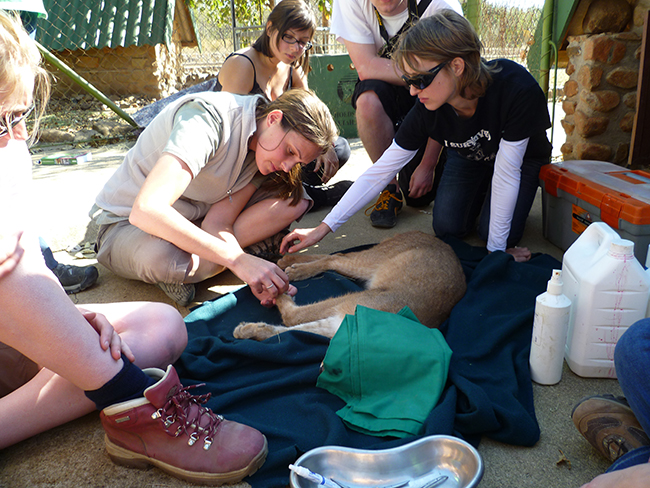 We went to local vet, Dr Rogers, to observe a treatment done on a cheetah from the Centre. Her claws had been growing through her pads and as a result, two of her toes had to be amputated, so she was going for a check up on the healing process. That night we had our first braai, which was lovely. Our third day began with moving two cheetahs to different locations on the site, so we were involved in getting them into a carry crate and transporting them. We also got to work with Nina, the vet, to help sedate a caracal that had been limping. We were tasked with monitoring the breathing and heart rate as well. We also helped Nina take blood samples from a cheetah to check for any potential kidney problems – this is a routine procedure. The fourth day Group A prepared small cat food, as well as food for the antelope, zebra and buffalo. We met Bubbles, the baby serval, who was orphaned when his mum was run over, so he came to the Centre. The fifth day for us was amazing, as we were giving the cheetahs injections. Sabrina and Sarah are trained vet nurses, so they had a better understanding than me (Chloe) and Anna. Nina and Licia showed us how to draw up the vaccine, and how to administer it. This was a fantastic experience for all four of us and we loved every minute of it. We particularly liked the adolescent cheetahs, where we had two or three at a time in the crush cages to inject as quickly as possible while the others were wandering around behind us. It was exhilarating and an enjoyable day for Group A. 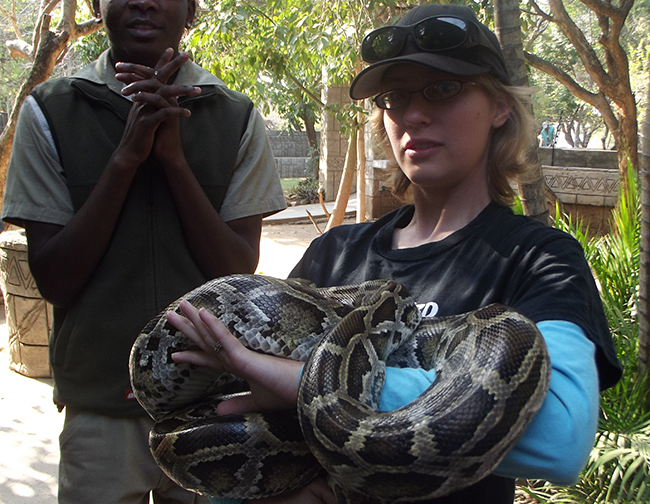 We went on a boat trip in the afternoon on the Blyde River Canyon, which was amazing. We also got to see hippos in the water. That night we had five elephants right outside camp, along with a baby. Sunday was our off day – two members of the group (Sarah and Sabrina) stayed at camp, but Anna and I went on the trip to the microlight flight, which was brilliant as we saw lots of animals including a rhino and a baby, elephants, giraffes, wildebeest and many more. Throughout the week we had some very interesting lectures and learnt so much in one week â€“ it is amazing. Group A have worked well together, and we are looking forward to next week and none of us want it to end. 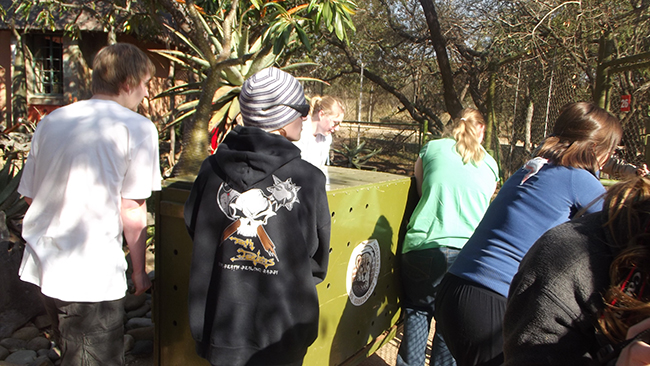 Group A & B moving a cheetah

After all arriving, we drove back to the Centre and went for a tour to familiarise us with our surroundings. The huts are roomy and the beds are comfy. The camp is home to animals such as mongoose, dog, cat and the sheep.

Group A did butchery at 6am while Group B fed the antelope and small animals e.g. serval, caracal etc. We then had a lecture on buffalo and how we control them. After lunch we went to town to contact family using the internet cafÃ©. After an hour there we went to visit Dr. Rogers and observe a cheetah getting its bandages changed. We then went to the shop to buy food and drinks for the rest of the week, and in the evening had a braai (barbeque) with the rest of the staff. It was so much fun!

In the morning we joined Licia and assisted her in catching two cheetahs that were swapping enclosures. Once that was done we joined the vet, and assisted her in observing caracal limp. After lunch we then had a cheetah lecture on how to manage and care for them and then fed the small cats and hornbills. 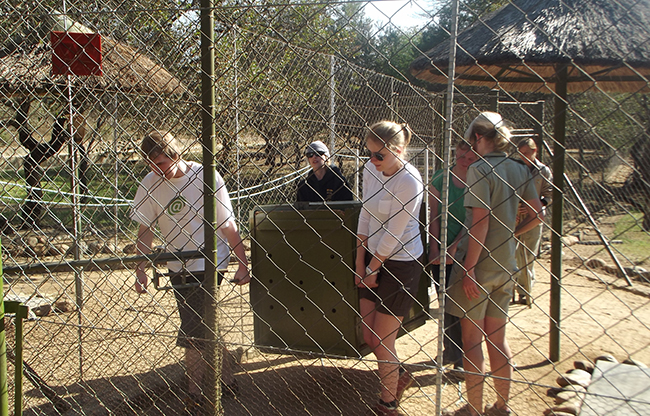 We, as Group B, did butchery, after which we went to vaccinate cheetahs against rabies and FELV. After lunch we fed the cheetahs and vultures then collected the bones from the cheetah enclosure.

Our group prepared small cat and hornbill feed, and hand fed the zebra and nyala. After lunch we then went on a boat ride down the Blyde River Canyon which is the 3rd biggest and greenest river in the world. We saw elephants outside camp.

This day was for relaxing. However, six of us went on a microlight flight, and flew over a game reserve and saw hippo, giraffe, buffalo, vulture, elephants and zebra.

It was our day to feed the nyala and sable antelopes. We then spent the afternoon playing with Savannah and Bubbles.

Watch this space for more!!