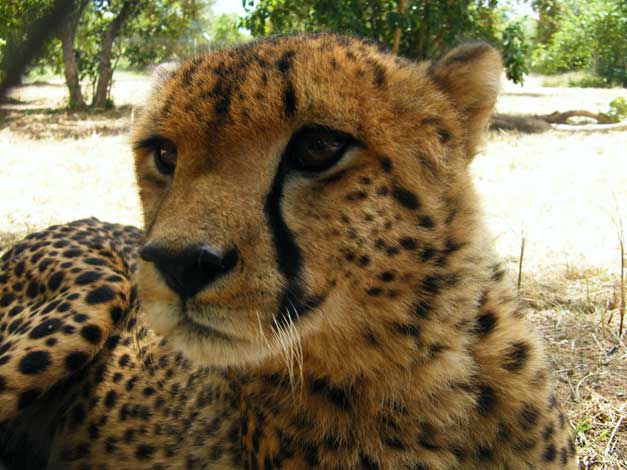 If you were to ask anyone who has been to HESC who their favourite cheetah is, the name Max would pop up most frequently. This purring Picasso has definitely captured the hearts of visitors, students and staff alike. At the tender age of three months, Max embarked on his career as a professional artist. His brightly coloured pawprint paintings – available at the Centre’s Curio Shop – now adorn many a living-room and office wall. With green, red, yellow, blue and orange paint all over his paws (and for some strange reason on his back too), this cheetah was clearly destined to become everyone’s blue-eyed boy.

At nine months old he was moved – along with his litter mates – to a much larger camp, where they were free to romp around and hone their hunting skills. Just before cheetahs reach sexual maturity, we separate the males and females in order to prevent them from mating with one another. To this end Max was moved to his very own enclosure.

Max’s new home quickly became a popular stop for guides taking guests on a tour of the Centre, as he is very easygoing and usually takes his naps close to the fence. The minute a vehicle pulls up he immediately starts purring, which is obviously a real treat for the visitors (although the staff never tire of hearing this either).

Max is easily recognisable due to his teddy bear face and dark coat, which is as a result of having a much higher concentration of melanin than usual. He has an extremely laid back personality, and whenever we call him he’ll approach nonchalantly. He is after all HESC’s VIC (Very Important Cheetah), so it stands to reason that he should not be hurried.

Max is only a year old, which is still very young (even in cheetah years). But while he still has a lot of growing to do, we’re positive that he’s well on his way to becoming a wise and independent adult. Max was adopted by Olivia at the beginning of the year. Click here to see photos of our other cheetahs.