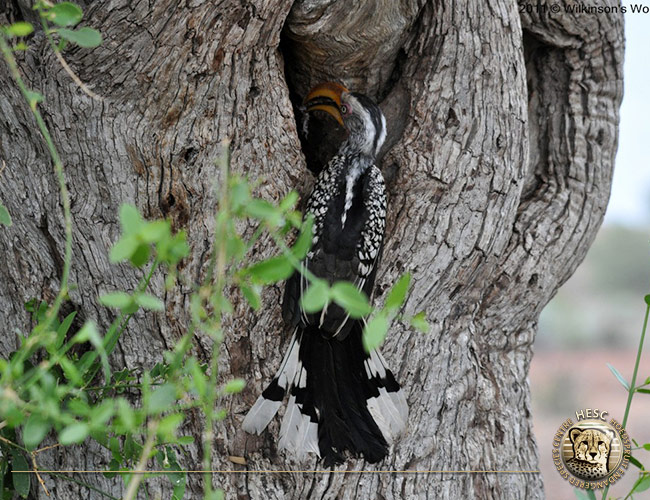 The breeding behaviour of a southern yellow-billed hornbill is quite interesting. They generally nest around the rainy season (usually in October). During this time, the birds become increasingly vocal and display to each other by bowing and fanning their wings above their backs. The southern yellow-billed hornbills are monogamous, and often live in breeding pairs or small family groups.

When they begin courtship, the male will feed the female for up to a month by bringing her small bits of food in his mouth. Once they have mated, the pair will seek out a naturally occurring hole in a tree – usually facing northeast, or an abandoned woodpecker’s or barbet’s nest. They will use a variety of leaf litter and bark as nesting material.

When the nest is ready, the female will enter the hole and close the opening with her faeces, leaving just enough of an opening for her mate to feed her through while she incubates the eggs. During her time in the hole, she will eject all food remains and faeces through the opening.

She will lay 3 – 4 white eggs and incubate for approximately 25 days. Juveniles take on average 45 days to mature.

Once the female has laid the eggs, she then moults all flight and tail feathers at once. If the male deserts her or dies, the family is doomed as chicks hatch at intervals. When the oldest is about 3 weeks, the newly feathered female escapes the nest by breaking down the wall. Both parents and young will then repair the wall with their faeces, and from there on both parents will bring food to the chicks for the next 6 weeks.

A lot of work undoubtedly goes into raising these young.