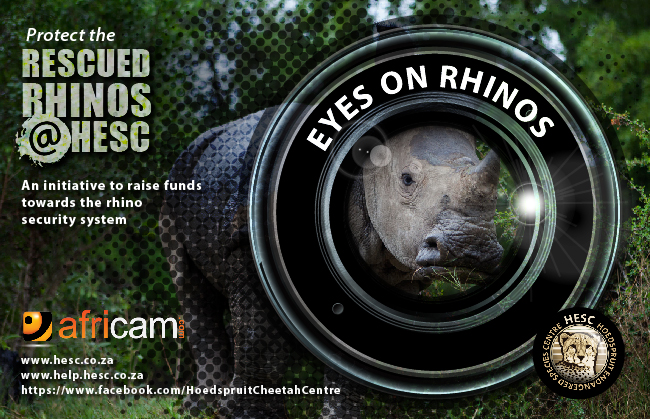 HOEDSPRUIT, South Africa April 9, 2015 – We have partnered with Africam, a long-standing supporter and friend, to launch a new initiative called ‘Eyes on Rhinos’.

After the arrival of two poached and now-rehabilitated rhinos (Lion’s Den and Dingle Dell), and more recently the arrival of our two orphaned baby rhinos (Gertjie and Matimba), we have found ourselves facing the immediate need to establish a rhino sanctuary at the Hoedspruit Endangered Species Centre. It gives us pleasure to announce the launch of the Rescued Rhinos @ HESC.

One of our most urgent requirements for the success of this facility is a security system, which will enable us to protect the rhinos (present and future) placed in our custody for care, rehabilitation and a safe haven. The total cost of the security system we require is ZAR5,000,000.00. We are never one to turn from a challenge, as we know that we somehow always find a way through the support of fellow conservationists (both individuals and businesses).

The Eyes on Rhinos campaign is a multi-tiered project with the sole purpose of raising funds for this security system.

During Phase 1, we aim to bring the two orphaned rhinos to the screens of supporters around the world. This is where Africam comes in. They have installed their live cam in the young rhinos sleeping enclosure, and viewers are able to check in real time, 24/7. Click here to check in on the two youngsers, right now.

Phase two involves raising the first portion of funding (ZAR400,000.00) to enable us to kick-start the security installation. Our goal is to reach this point by the end of May 2015.

Phase three involves the final fundraising initiative, which will facilitate a state of the art system able to monitor the whereabouts of the rhinos and link our network of custodians and security personnel around the clock.

While the total cost seems extraordinary and is certainly out of the reach of most of our supporters around the world, we have initiated The Hundred Challenge. We believe that if each rhino enthusiast pledges as little as ZAR100 (the equivalent of less than US$10, Euro10 and GBP6), we could see a wave of support which would quickly reach the desired project deliverable.

Help us to protect our rhinos by pledging your financial contribution, or by stimulating awareness within your own networks. Every person counts. Every person makes a difference.

Click here to access our online donations portal, where you can rise to The Hundred Challenge (or make any contribution which sits comfortably with you).

Click here to watch an amazing clip of young Gertjie and Matimba, now inseparable and of great comfort to one another.

Yours in Rhino Conservation