I’m sharing this story from two perspectives – mine and that of Tigere Matipedza.
Adine Roode
Shawu walked for over 18 km, leaving HESC just after sunrise. It was a brisk walk with stops in between to drink water, take mud baths and rest his feet. I was so proud of him and how amazingly well he coped on the walk. I could see that his daily walks on the reserve with the Jabulani ranger and elephant educator had paid off. During our walk he was happy and feeding well, just as elephants do. 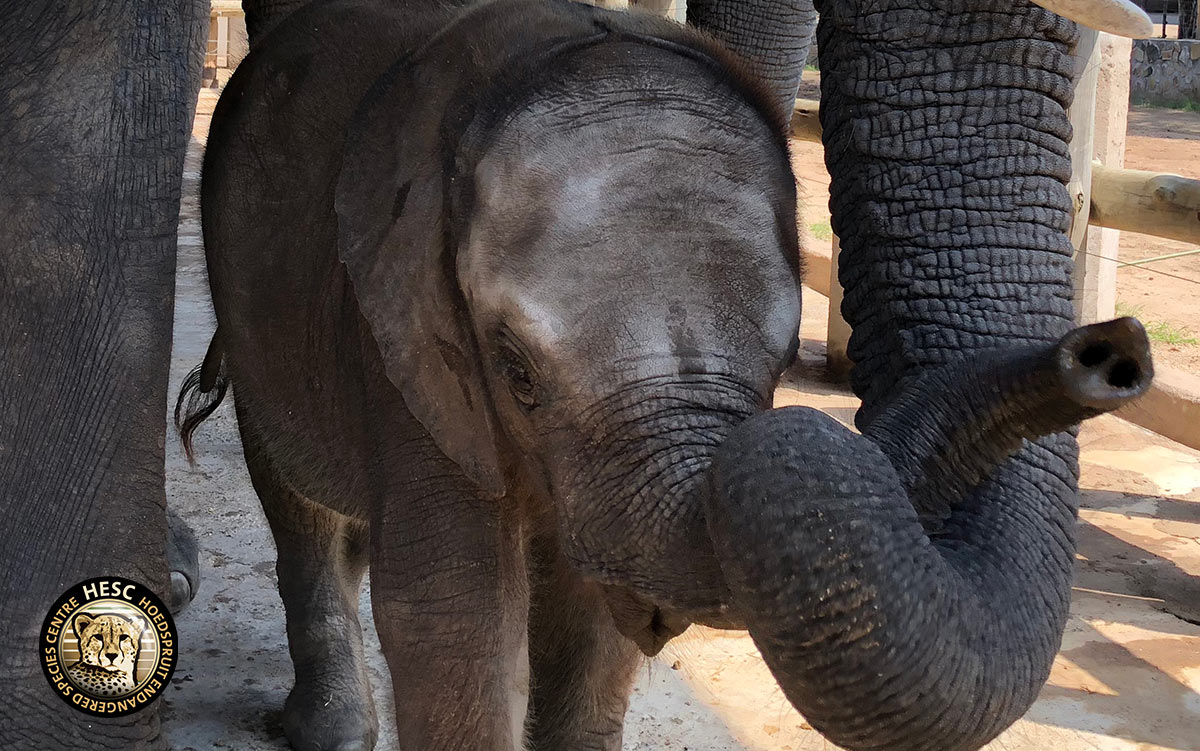 Elephants smelling and caressing Shawu with their trunks shortly after arrival in the stables
But then reality stepped in as we neared the end of our walk and realised we had only a few minutes before Shawu would meet his family. Each of us was busy with our own thoughts, not really knowing what to expect.
We stopped for a final run down through our plans and made contact with Tigere Matipedza (who is in charge of the Jabulani elephant educators and herd) to check last minute details. Shortly after this, Shawu sensed something and started to trot but wanted us to stay close to him. We ran past giraffe and impala, but Shawu barely glanced at them. We could see the elephant educators and herd in the distance. Tigere was supervising that team and as planned, Israel and Joshua, were there to step forward as we approached with Shawu in order to embrace our little elephant boy and provide familiar scents and faces. 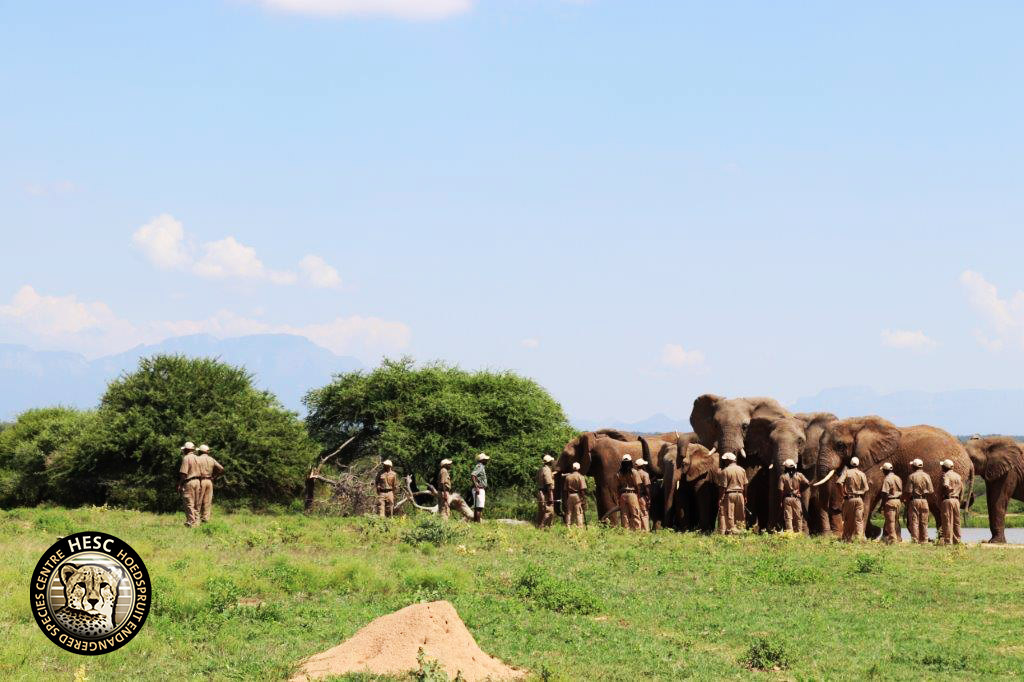 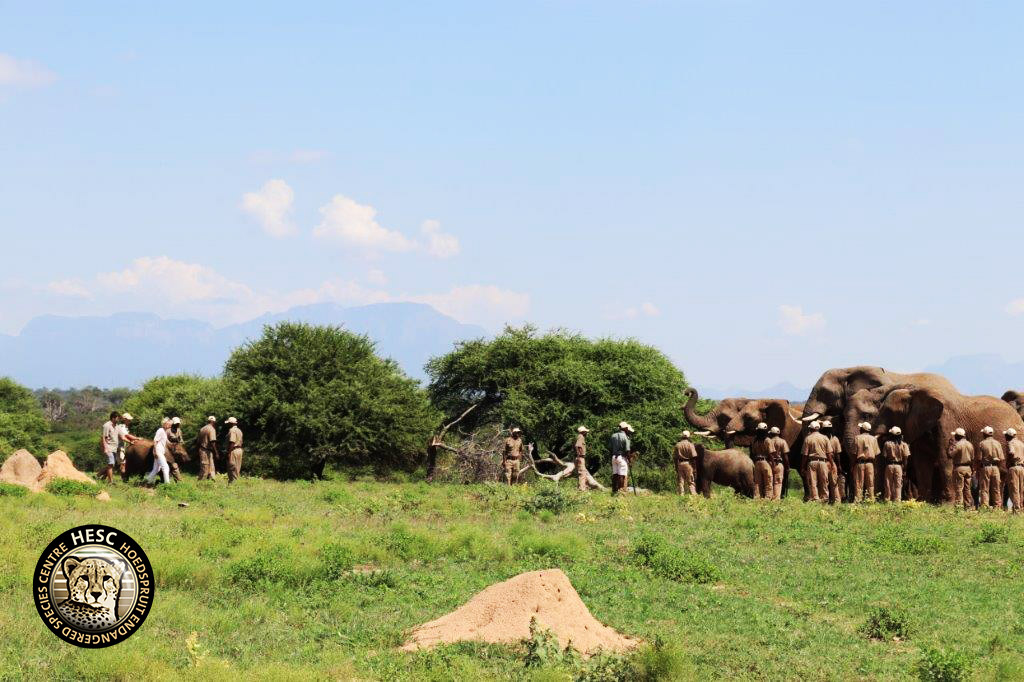 Israel and Joshua joining Shawu and group for moral support 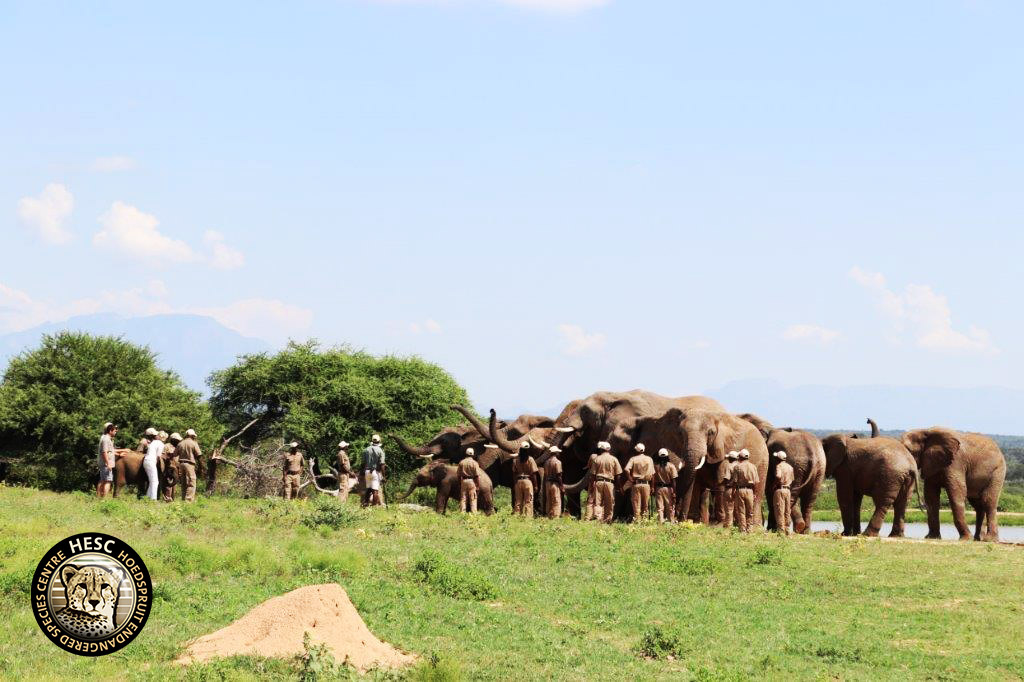 Shawu stopped in his tracks whereafter the herd approached Shawu with rumbling and trumpeting
As we moved closer, I saw Jabulani coming forward with Tokwe on his left and instructed Jabulani: ‘Steady my boy’. He listened, but at that point I realised that Shawu was not going to stand his ground and that he was totally overwhelmed by the elephant herd. Although I told our group we were sticking to Shawu, come hell or high water, we had to move away. This was so not part of the original plan.

Tigere Matipedza
My responsibility was to herd the elephants and educators together. The wind was blowing towards us and the elephants picked up Shawu’s scent and lifted their trunks. They were very calm and we could see Adine and the group with Shawu approaching. Israel and Joshua walked over to Shawu’s group and the herd were clearly very keen to meet this new youngster.
What we hadn’t expected was that Shawu wouldn’t want to leave the humans who had cared for him for the past 16 months. Shawu was scared and even though the elephant educators stood their ground, the elephants broke through to meet Shawu, while he got the fright of his life and turned around and ran off.
We were all a little confused at what was happening. The elephants rumbled, Shawu ran away looking for his human carers, the herd followed, rumbling and trumpeting as elephants do when a new baby is born. They were welcoming this new baby to the herd.
I then realised that the best place for us and the elephants to meet would be at the stables and commanded the elephant educators to run to the stables for Shawu to follow them there. This was where Shawu stopped and met the herd. For the first few minutes he paced up and down, while Limpopo, first born of Tokwe, stayed close by. We gave them pellets and when Adine and the elephant educators that he knew caught up, they were able to calm him while he started picking up pellets and eating. All the elephants were then able to meet him.

Left: First night for Shawu in the stables. Stavros doing night duty and keeping a close eye on Shawu
Right: Elephants smelling and caressing Shawu with their trunks shortly after arrival in the stables

Adine
The elephant educators were incredible. They were a team and while some of them tried to protect me and others tried to protect Xander my son, all I wanted was to be with Shawu and calm him down, much to the frustration of the elephant educators. The introduction felt like ages, but in fact was only about three minutes long. I was so proud of Tigere and the team’s ability to change plans at the last moment and to set off to the stables.
What an amazing team I have! With them I am not only able to go beyond the impossible in order to make it possible, but the elephants, my family and I will be protected at all times.
While Shawu had calmed down, he clearly didn’t trust the gentle giants sniffing and caressing him. We withdrew the people to settle him down with his new family. Although he was frightened, he was not too stressed and it was very interesting to see how our herd accepted the orphaned baby and just welcomed him. There were a few individuals who surprised us in that they were much more welcoming than with Timisa’s introduction. Off course, Mambo set off in his own direction before reaching the stables, fooling only himself by chasing the zebra and giraffe and Sebakwe took a right turn and missed the entrance to the stables. This left the two of them outside the stables, but they joined the rest of the herd inside, shortly afterwards.
It didn’t take long for Shawu to start investigating his new surroundings with Limpopo following at his heel, Tokwe in the background to oversee everything and Kumbura following with Timisa. Timisa is slightly older than Shawu, but one could see that she was thrilled to have a playmate and I am sure that the two of them will soon be best of friends.
Everyone, elephant educators and the entire herd, contributed hugely to the success of this exercise and Shawu settled down during the night. Stavros stayed up the whole night, with Tigere and myself checking in, and I am delighted to report that Shawu and his family had a peaceful night.
When Shawu wanders off, Limpopo rumbles and Shawu stops in his tracks. When Limpopo rumbles again, Shawu turns around and move towards her. Limpopo gently caresses him as he passes her – never forcing him to do anything other than offering him time to settle in while comforting him.
In the morning we moved Shawu with the females to the paddock and he seemed perfectly happy. His dung and urine are normal and he is not secreting and he is finishing his milk bottles twice a day, as per normal.
The introduction was planned based on previous experiences, but because each and every elephant has its own personality, we had to think on our feet and adapt our strategy as things unfolded.

We’ll keep you informed of Shawu’s adaptation and also share the planning of the introduction in later blogs.