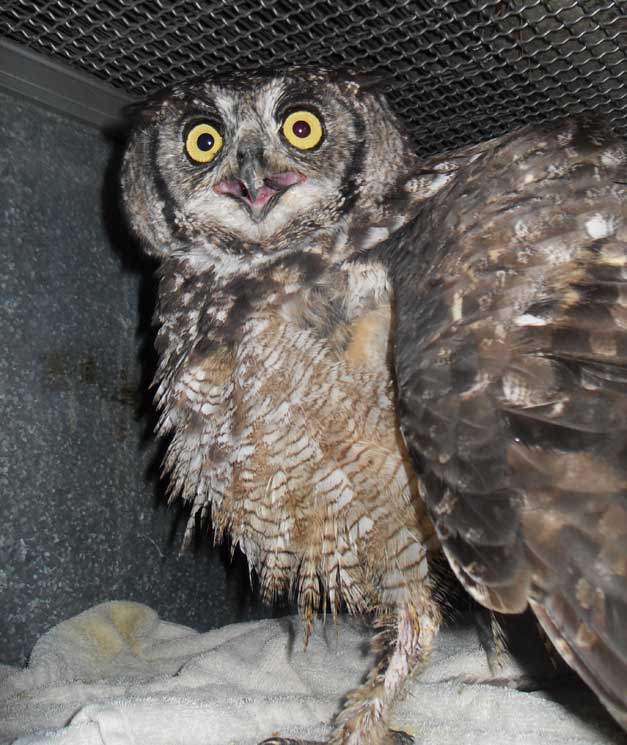 In November 2007 we welcomed four African Spotted Eagle Owls from a Zoo in Johannesburg.

Two of them have since been successfully released back into the wild, and at night we still sometimes see them in the area.

Unfortunately Spottie had a hanging elbow, which the late Professor Meltzer said could not be repaired. This meant we could not release him, so we decided to keep Spottie and one of the females at HESC to see if they would breed.

They embraced the challenge wholeheartedly, and at the beginning of last year two chicks hatched. The beautiful result of their lovin’ efforts. We released these chicks near the Centre in November.

One of them has since paired up with a mate and flown off to set up home elsewhere, while the other continues to hang around the avery just in case an opportunity for a free meal presents itself.

About a week and a half ago Spottie started limping. We also noticed a small drop of blood on his foot, and upon closer inspection discovered that the bottom part of his foot was in the process of dying off.

We rushed him to Dr. Scheepers in Phalaborwa, and he told us that Spottie had lost the blood supply to the bottom part of his foot. He said one possible reason for this could be that Spottie had been trying to breed again, and his lady friend had bitten him on his leg.

The sad result was that the lower part of his leg had to be amputated. Fortunately the procedure wasn’t life threatening, and since birds adapt quite quickly, the missing limb didnâ€™t seem to bother him too much.

Spottie will have to remain in quarantine for a few weeks to make sure that he heals nicely and doesn’t develop complications. Once his leg is properly healed, we’ll take him back to the avery to be with his life partner again.

While he’ll be able to live out a fairly normal life, Spottie won’t ever be able to breed again. This is not the end of the world however, as he’s already done his bit to ensure the survival of the species.

The time has come for this feisty owl to sit back, relax, and enjoy his retirement. Visit the “Birds” Album on our Facebook page to see more photos of Spottie and the other animals at the Centre.

AN UPDATE ON THE POACHED RHINOS