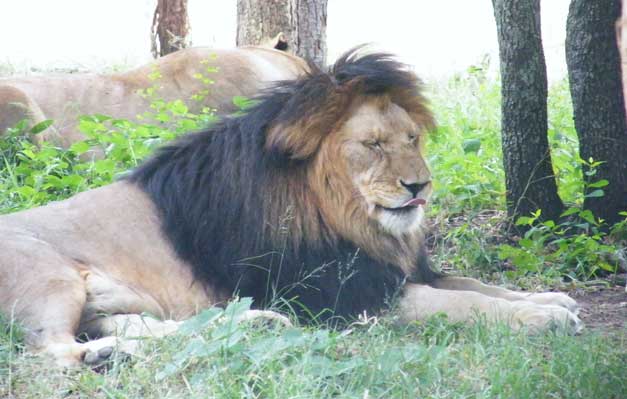 With HESC and its staff housing being surrounded by the Kapama Game Reserve – Big 5 area – we were recently afforded the incredible experience of listening to wild lions interact with those in captivity. Four lionesses had been in the area for about a month. We’d hear them roaring at night and in the early hours of the morning, and each time they did, Piet – our magnificent male lion, and Lucky – our timid female, would roar in response.

We wondered if perhaps these females were flirting with Piet, whose “larger than life” roar is enough to make any lady swoon. But then Kapama’s resident male lion arrived on the scene, and the grumpy husband (or overprotective father, we’re not sure which) lured the females away from the unknown male who was heard but never seen. After that the females weren’t seen in the area again, so we never did find out if they were keen on Piet or not.

It was a real treat having the lions around, and we’d often find them on the road to or from work. One night we were driving along in an open safari vehicle when one of the females roared a mere two meters from us. It’s hard to believe that a lioness of such relatively small stature can make such a huge noise.

Along with the four lionesses, three white rhinos also hung out on the plains across from our housing for a couple of weeks. We are really blessed to have such remarkable working conditions, and it definitely keeps us motivated! Working with endangered animals and being exposed to such a variety of wildlife on a daily basis, serves to remind us that all our hard work is contributing to the conservation of these species. And hopefully one day all animals will be as wild and free as they were meant to be.

Click here to see more photos of our beautiful lions.

Days of our feathers: Season 1