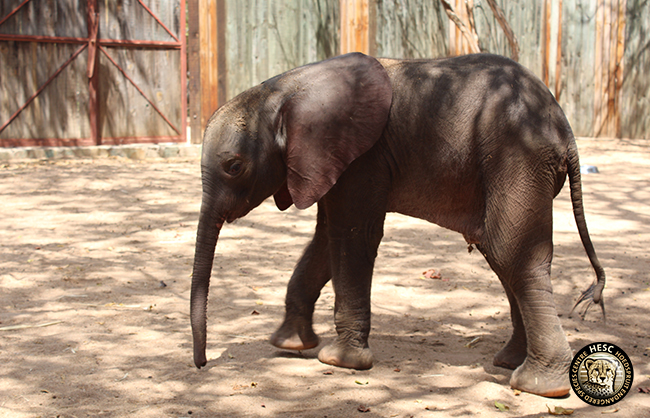 On 16 February we took custody of an infant elephant calf that was found after having fallen into a drain at the Palabora Copper mine. Brothers Johan Bezuidfenhout and Quentin du Plessis freed him. Soon thereafter, the reserve manager (Johann McDonald) tried to reintroduce the calf to two different elephant herds in the vicinity, but sadly his attempts were unsuccessful and the baby was rejected.

Dr. Michelle Henley and the team from Elephants Alive were called in and rushed the little bull to the safety of HESC where Dr. Peter Rogers and his team were on standby to rehydrate him, and to do what they could to help him to recover from the trauma and severe heat that he had been exposed to since he was found. 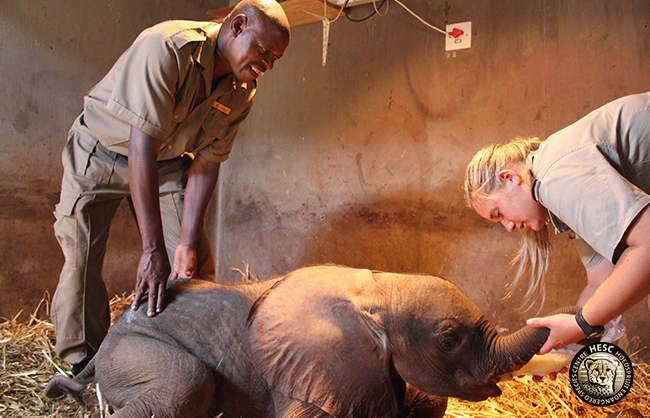 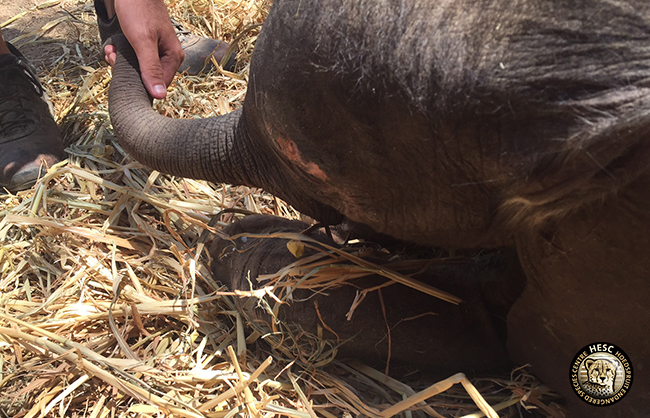 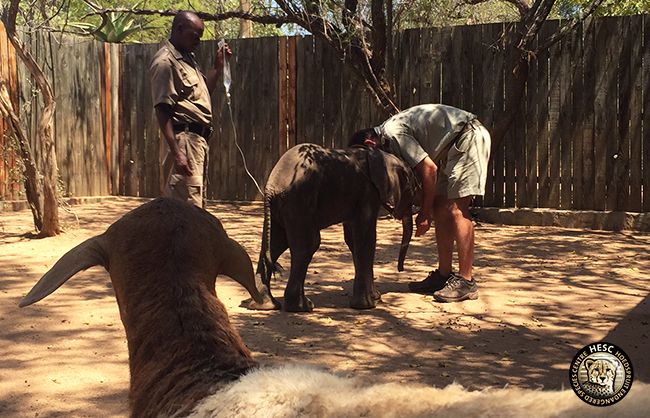 Initially thought to be a female, the tiny pachyderm was named Bela. His name was later changed to Amanzi (isiZulu for “water”) when it became clear that he was actually a bull.

He took his first 750ml bottle of milk formula at 5am the morning after he arrived at HESC, and later a full bottle of 900ml. While this was good news, it was also a critical time as it was important to get the balance in his formula right. The most immediate threat to the baby was diarrhoea, as this would worsen his dehydration causing other major problems. We were all praying furiously that the formula was compatible with his very young system. 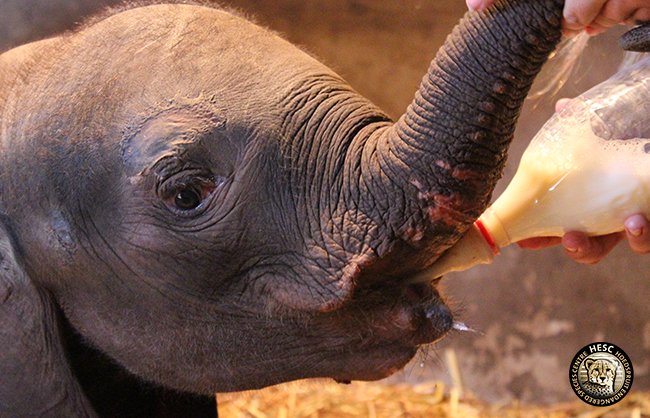 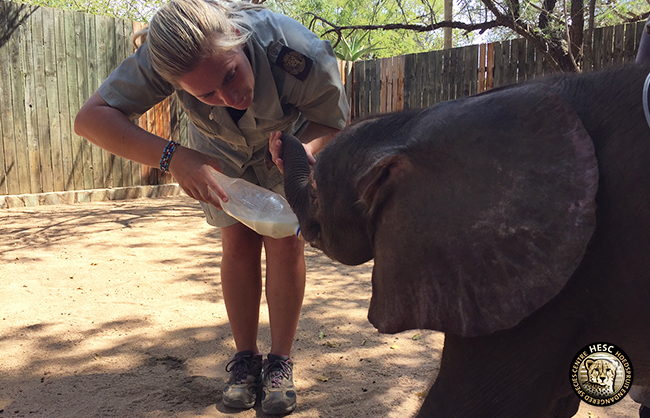 Stavros Chakoma and Liverson Sande, two senior elephant groomers from our sister property, Camp Jabulani, took shifts with him while our curators saw to his frequent milk feeds. Stavros stayed with him over the course of the night, which included making his thumb available for the unsettled youngster to suck on! This seemed to settle him somewhat, and also got him used to the taste of the formula (which Stavros cleverly dipped his finger into before soothing the baby). 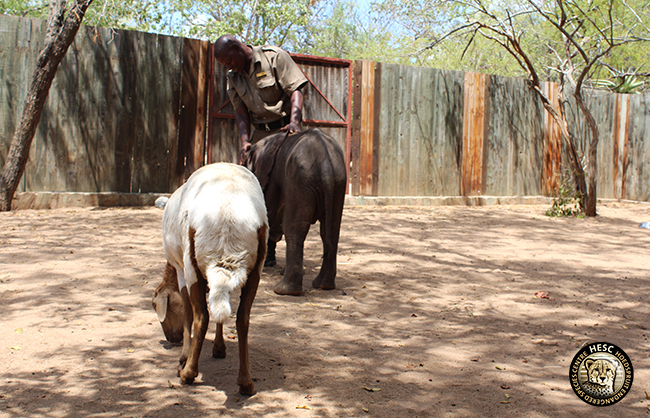 Liverson took over from Stavros for the daytime shift, while Joshua Dube also stepped in to lend a hand.

At that point it was impossible to predict an outcome. The stress and trauma that Amanzi had suffered were immense, and every minute counted. We needed to keep him calm, and to ensure that as few people came into contact with him as possible. Dr Rogers’ team monitored his condition constantly. 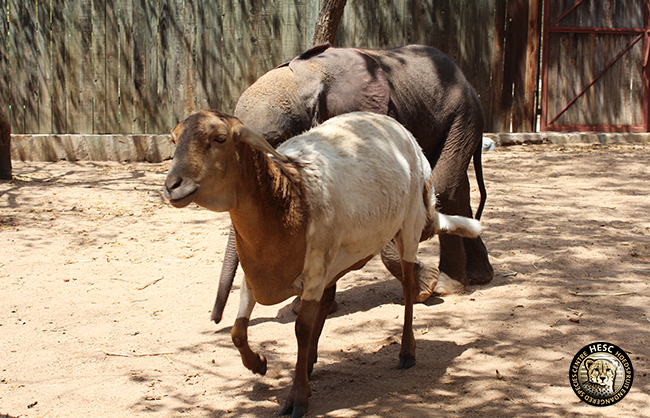 From the minute Amanzi’s story was posted on our Facebook page, people from around the world started to follow his story, and to actively pray for him. Well wishes poured our way. Some also started donating funds for milk, and offered their help to try and find the right formula. 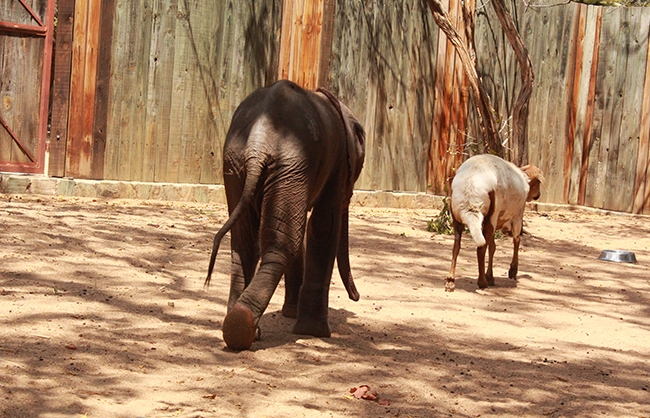 Although his exact age was never established, it was clear that he was neonatal and only a few weeks old when he arrived at HESC. Being so small, and with elephant calves of that age being very dependent on their mother’s milk, Amanzi’s health was up and down every day. Pro-vet Wildlife Services, with Dr. Rogers at the helm, ensured that he had the best veterinary care. Dr. Liezel Steinmann and Janelle Goodrich contributed on-the-ground expertise. As humans, we could only try our best to replicate what his mother and extended family would have given him. 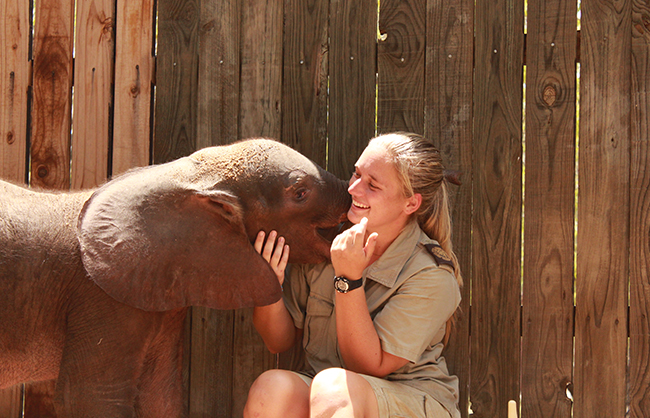 On the 29th of February, two weeks after his arrival at HESC, Amanzi became very weak and lost his appetite. He was being rehydrated via a drip under the close supervision of Dr. Rogers. He was never left alone and Joshua and Stavros rotated shifts every 12 hours. Amanzi also had a sheep companion, Lammie, who he followed around in the boma when he was still stronger.

Playing with water was Amanzi’s absolute favourite time of the day, and he truly lived up to his name. Joshua would walk with Amanzi, gripping his drip in one hand while splashing water on the young elephant with the other. Amanzi would stop, gurgle the water and spray some onto Joshua too. Even when his legs couldn’t support him any longer, he collapsed and rested his head on the side of the trough, finding the strength to still play in and gurgle with the water.

By 1 March, Amanzi was trying his best, but he was losing more fluids than what he was gaining as he refused the bottle. Dr. Rogers had him on a drip, and despite his weakened state, his spirits still picked up when he saw water. 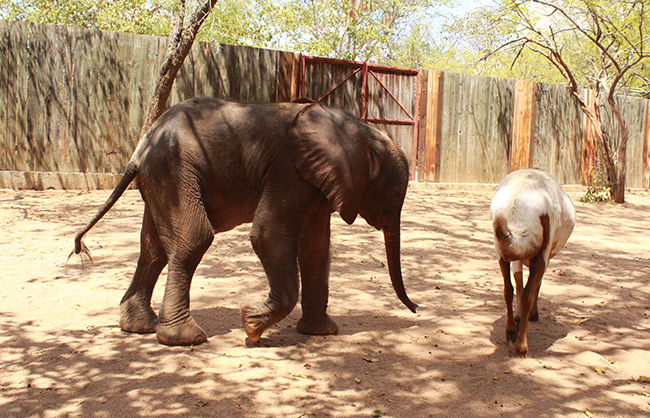 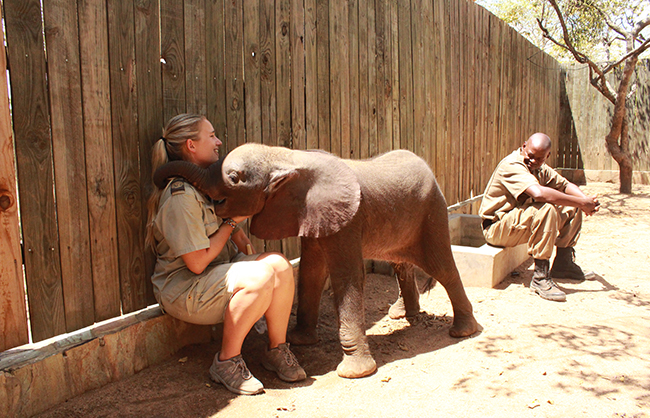 By 2 March his condition deteriorated further, and despite all our efforts to save him, he passed away at 15:20 in the afternoon.

It was fitting that on World Wildlife Day on 3 March, Amanzi – our little elephant fighter who arrived so unexpectedly and found a place in the heart of so many people – was honoured.

Several tributes were made to Amanzi, including this beautiful one from Dr. Michelle Henley of Elephants Alive, the person responsible for bringing Amanzi to us in the first place. 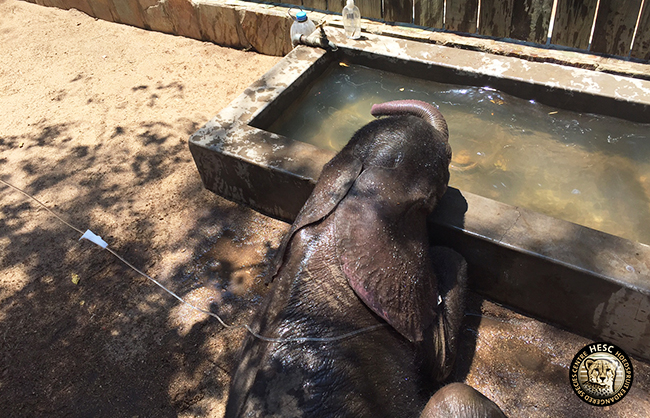 They say that when suffering has meaning
It can no longer be called suffering.
Looking up at the star-studded sky,
I ask why?
Why your 16-day presence as the little Water Prince?
We hoped you would become the mighty wave
That beats upon the shore of our terrestrial existence.
Like the six ton bull who strides across the plain
To push the boundaries of our generosity of space,
And begs for man’s goodwill to ensure his kind’s persistence.
Instead you were the moonlit ocean
Of gentle ebbs and flow
Followed by
Our sighs and smiles
Our grief and joy
At what you had to show.
Now I realise that upon your tiny frame
Hinged the strongest of many waves:
Those waves of unity, caring, compassion and love
Which beat upon the hearts of many who followed your short-lived story.
So beat on and on
Oh little Water Prince of Glory!

Palabora Copper has addressed the potential danger that their sumps hold for elephants during this drought by putting a grid over the sump next to the raw water pump station to prevent any other neonate elephants, like Amanzi, from the same devastating fate.

We’ll never forget this baby elephant, and the place he stole in all of our hearts. Despite the tragic circumstances surrounding his very short life, he brought together a lot of people and highlighted the immense good that exists in this world.

We are grateful for the opportunity to have played a role in his life, albeit for such a short period of time. 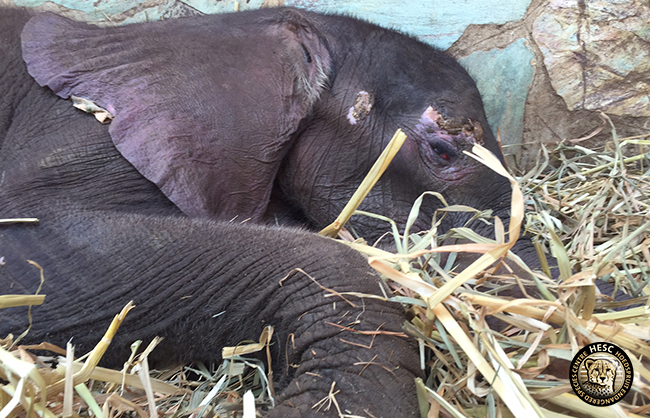 Why does Mopane eat elephant dung?