Stompie arrived at HESC in a critical condition, on Tuesday 10th November 2015, nearly three year ago. He was approximately seven months at the time.
This brave, and determined young rhino calf, not only had to go through the horrific ordeal of losing his mother to the hands of violent poachers,  but somehow survived an attack on himself, from what we think could have been a hyena. It is possible that he may have been trying to protect his mother’s carcass.
The animal that attacked him had managed to bite his tail off, and had chewed at his rectum area. Needless to say, little Stompie was in huge physical and emotional pain when he arrived.


Dr Roger’s was set up and ready to treat him straight away, when he arrived. It was soon to be discovered that infection had set in, and had spread into his rectum walls too. It was going to take quite some time to get him back to health.

Stompie slept with his rear in the air at times, due to the discomfort of his wounds being in such a sensitive area.

Stompie had multiple treatments, but it wasn’t too long until Dr Rogers had him in a much better bill of health.
Another orphaned rhino whom we named Balu, arrived very soon after Stompie, and they hit it off straight away when they met. They were excellent company for one another, and they never left one another’s side;  much like Gertjie and Matimba’s relationship.  In fact, all four of the “boys” ended up spending quality time together.

Stompie healed well, and he gained strength fast, he had created strong bonds with the rhino’s and some of the staff at HESC too.

Stompie still chooses to spend majority of his time with Balu. They both currently share land with  Khulula, Olivia, Nhlanhla and Lulu; bringing an equal mix of males and females to the group.


It gives us such pride to see what a strong rhino bull he has grown to become. We can only hope that the horrific ordeal he went through is now a very distant memory now. 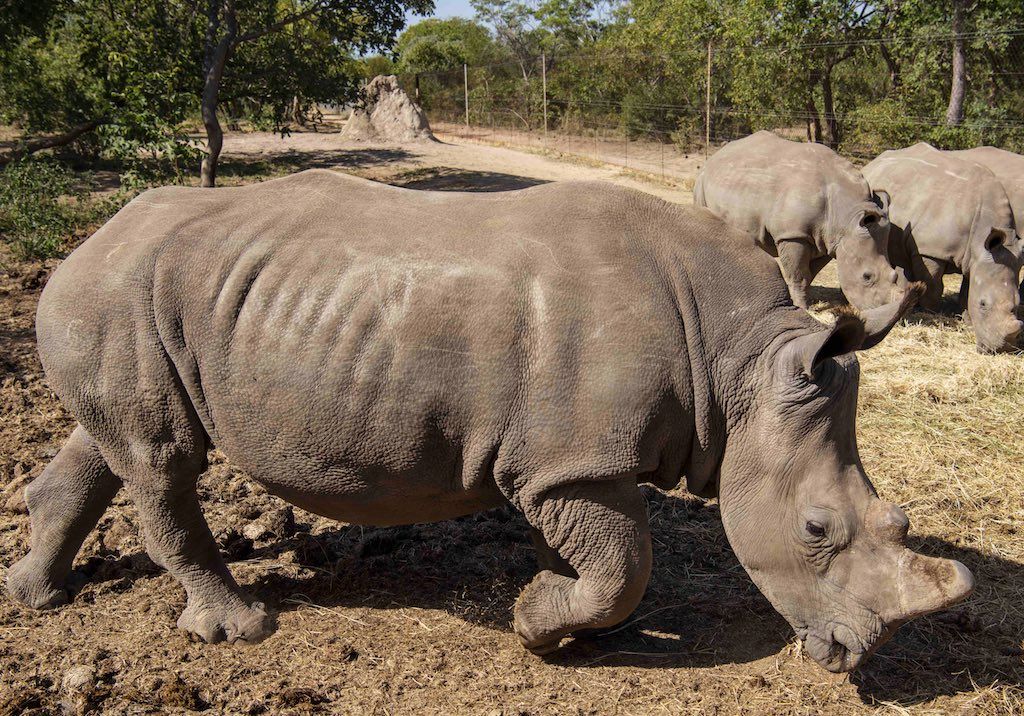 Stompie in 2018. Strong and Bold.
Please consider contributing to Stompie’s every day care. It is an ongoing cost that we rely on funding for. Click HERE to look at our fostering options.

ENSURING THE SAFETY OF OUR ANIMALS – A BLACK MAMBAS UPDATE