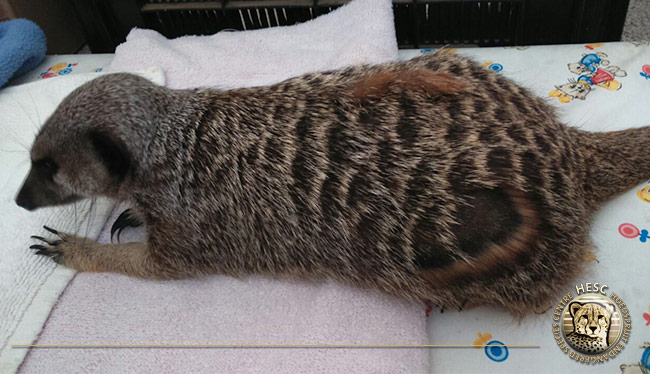 Willa Riekert (HESC’s Facilities Manager) noticed Nipper was not herself (swollen and laying still), so she informed our Head Curator at HESC (Christo Schreiber) immediately. Christo saw that Nipper was in a lot of pain, so he gave Nipperan an anti-biotic (Baytill) as well as an anti-inflamatory (Petcam).

Willa then rushed her to Dr. Peter Roger’s practice (Provet) to Liesel Steinmann (Dr. Rogers assistant) to save this little Meerkats life.

Liesel had to shave Nipper on the side (close to her hip) were she saw blood, and then it was apparent that it was a bite.

Back at HESC, Basie Riekert (Maintenance Manager) caught the snake and was able to identify it as a Vine Snake (a very poisonous and deadly snake of which there is no anti-venom).

Liesel gave Nipper a Quarter zone Injection as well as put little Nipper on fluids. By the end of the visit to the vet, Nipper started drinking water on her own.

Nipper went back to the vet on the 25th March 2015, as she was still in a lot of pain of which Liesel gave another Quarter zone injections and some more fluids.

Nipper was still swollen and sore, she received all the love and care (and treatment) and we were hopeful about her recovery. Unfortunately, Nipper passed away late last night as there was simply to much venom in her bloodstream.

Nipper will surely be missed and we know she is at rest now.

THE HESC LAUNCHES RESCUED RHINOS @ HESC, AND ANNOUNCES THE 'EYES ON RHINOS' CAMPAIGN