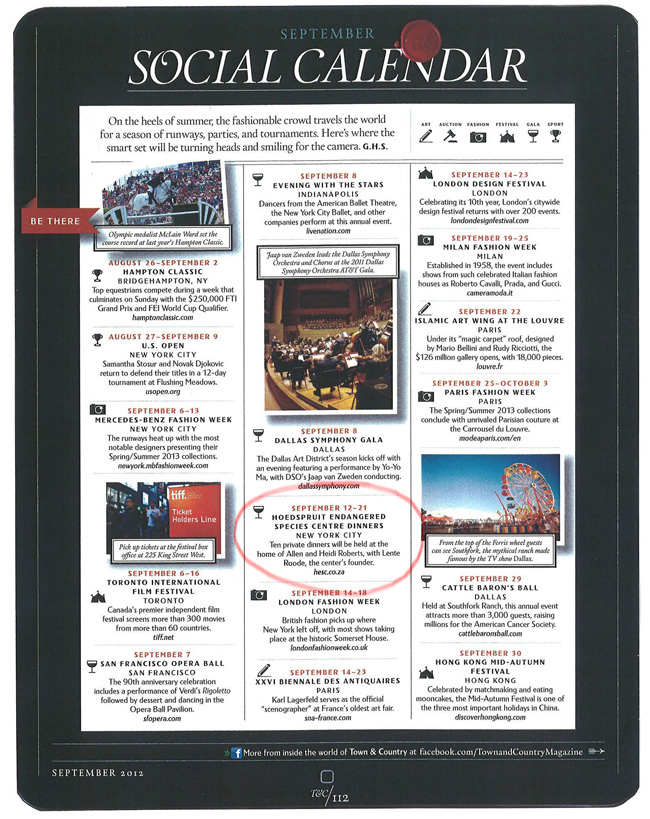 The US Friends of HESC,  established by New York couple Heidi and Allen Roberts, hosted their annual fundraising events in favour of the Hoedspruit Endangered Species Centre, recently. The series of fundraising dinners took place between the 12th and 21st of September 2012.

Mrs Heidi Roberts was thrilled when the US Friends of HESC’s Fundraising Dinner was declared one of the highlights on the social calendar in the September issue of Town & Country magazine. For the last six years, Mrs Roberts has hosted a series of 10 dinners, each of which are attended by 24 VIP guests. Her four-course dinners, imbued with her exquisite personal touch, are legendary.

HESC’s founder, Mrs Lente Roode, addressed the guests, sharing all that has been achieved at the Centre over the course of the year, as well as informing them how their generously donated funds have been allocated.

Long lasting friendships have been formed, as many of the US Friends of HESC whoâ€™ve visited Camp Jabulani and the Hoedspruit Endangered Species Centre, have become our friends in every sense of the word.

The Biggest Rhino Cake In The World