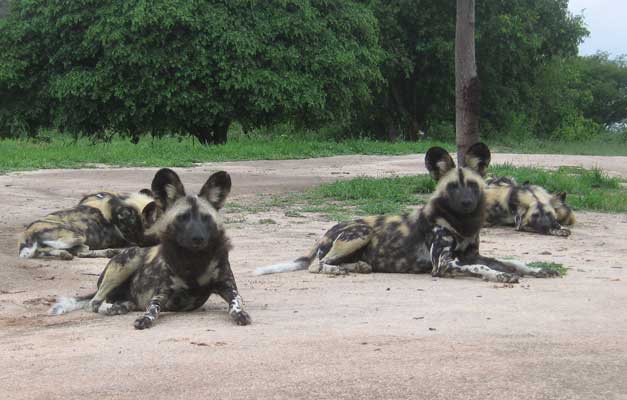 Summer is definitely the best time of the year to photograph the wild dogs. The fresh, green bush coupled with the dogs’ fluffy white tails and beautiful black, brown, white and chestnut coloured coats is nothing short of breathtaking. But what really makes wild dogs stand out in the crowd are their quirky, down-to-earth personalities.

The alpha male in our pack is best described in a single word: legendary. Because he is the biggest in the pack, the other dogs automatically respect him. This can easily be seen in their submissive behaviour whenever he is around.

We know him by the three white spots he has on his right hind leg, which remind us of the constellation Orion’s belt. This is particularly apt as this dog really is larger than life. He exudes power, agility and strength without any effort at all.

On the other hand, our alpha female is quite shy, and constantly hiding behind the alpha male. But don’t be fooled by her timid facade, this lady is more than capable of defending herself should the need arise. She is characterised by the absence of her tail, which she lost during a fight with the previous alpha female. She may well have lost her tail, but the other female lost her life in that fight.

Whenever we go into the enclosure on foot, it is usually the younger dogs in the pack thatÂ  approach us. Squatting down on their front legs, buttocks in the air – very curious, wanting to play. While the older dogs just watch from a distance, as they’re used to us by now.

Another of our favourite dogs in the pack is ‘Sleeping Beauty’. This male is very old, and when the others are running around and playing he’ll generally be found sleeping under a tree.

Wild dogs are known for the strong social bonds, and what makes them different from other predators is that they take care of the old and sick members in their pack.

The pack also urinates and defecates on one another as a means of ensuring they remain together as a unit. This also prevents strange dogs from entering the pack without themÂ  knowing, as the intruder’s scent which would be instantly recognisable.

Wild dogs are the most successful of Africa’s predators, with a success rate of about 80-90%. Whereas cheetahs are only successful about 35% of the time, and lions and leopards 30%.

When you take all of this into consideration (and let’s not forget their characteristic Mickey Mouse ears), it’s little wonder we’re as passionate as we are about protecting this magnificent species. Click here to see more photos of these wonderful animals.