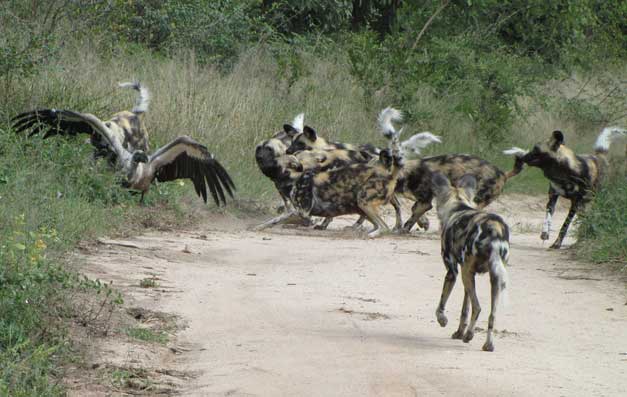 We witnessed a remarkable thing here at the Centre recently. We were busy feeding the Wild dogs when the ever opportunistic vultures chanced their arm (or in this case wing) – as they always do – to get at the dogs’ meat. One in particular was a little cockier than the rest, and to the point of being almost fearless, marched in where angels and wise birds fear to tread. When the dogs began chasing and surrounding him, the wily bird actually played dead.

One of the dogs even nipped him on his left wing, although not hard enough to cause any lasting damage, because the brave (or stupid?) bird flew off a few minutes later. Had it not been for the fact that the dogs had already eaten their fill, the vulture would more than likely ended up as dessert.

A guest that was touring the Centre with Jaco Steenkamp managed to take some photos of this incredible event. Click here to see the rest of them.