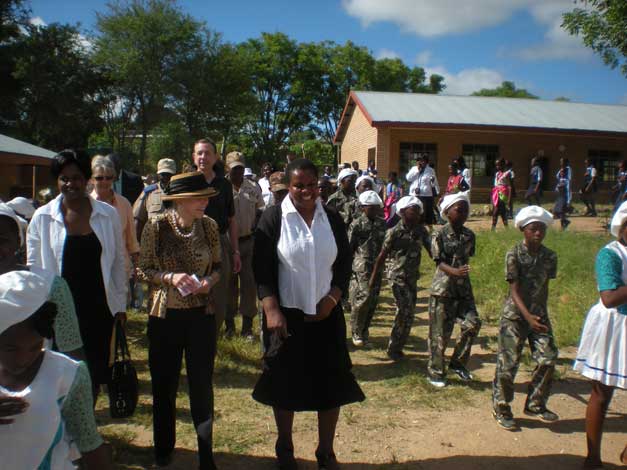 We recently launched our “Leave your footprint” campaign. Starting with Paulos Ngobeni Primary school – HESC’s existing charity – the initiative will serve to assist disadvantaged schools within the Limpopo Province community,

Founder members of the US Friends of the Hoedspruit Endangered Species Centre – Heidi and AllenÂ Roberts – contacted the Centre offering to donate a computer to the school, and this essentially kick-started the campaign.

For several months leading up to the event, the student coordinators worked tirelessly to collect donations and create awareness about this new campaign. On the 2nd of March the donations were presented to the Paulos Ngobeni Primary School – a memorable milestone for the learners as well as the school. Mrs Lente Roode (HESC founder), Mr and Mrs Roberts, the March intake of the Cheetah Conservation Programme students, Gretha Scheepers (General Manager), Willa Riekert (HESC Maintenance), Elize Gildenhuys (Manager of the Deli at HESC), HESC student coordinators and organisers of the campaign, Karen Swiegers and Jeanré Brooks all attended the event.

The school arranged for the traffic department to lead a march by the pupils as the HESC group arrived. A helicopter from the Air Force’s 19 Squadron landed in front of the learners on their sports ground, and members of the Department of Education then addressed the guests. This was followed by a number of exciting performances byÂ the learners.

“We are extremely passionate about this campaign as it gives us an opportunity to give back to the community and assist the less advantaged schools and children with the necessary tools and resources to aid education,” said Adine Roode.

The “Leave your footprint” campaign is set to continue for as long as their are schools in the community in need of assistance. If you – whether in your personal capacity or as part of a company initiative – want to participate in this campaign, we ask that you donate a pair of shoes as a token of “leaving your footprint”.

The next large project we’re planning is to assist the teachers with computer training and skills development. This will take place during the April school holidays. Click here to see more photos from this event.