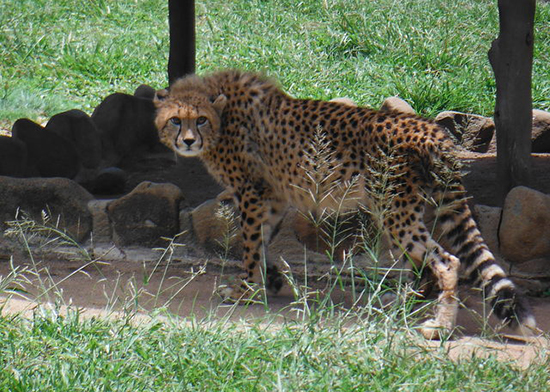 It amazes me to see how tough such a small creature can be. It makes you think how humans will wallow in pain, unlike animals which just keep on going and never give up the fight. I saw Mary Jane hanging from a tree on ‘that’ first day with fear in her eyes, not knowing what was happening (and what was going to happen) to her.

After the first few visits to the vet, Mary Jane started trusting us and I believe she knew that we were helping her. Unfortunately she started to realise that every time she had to be crated, she was going somewhere where she would be hurt. Her natural instinct kicked in. She had no sign of fear left in her, and to see her change from fragile to fierce was something special.

The first time she set foot on grass after six months of concrete and bars, she didn’t know what to do. She walked around and nibbled at the grass, not too sure what it was. I believe she appreciated every moment. It was so fascinating to see how easily Mary Jane adapted to each of her new environments.

She is doing so well today, with no trace of scars or limping…

Mary Jane has won the battle!

Mary Jane was born on 5 May 2012 to Rosalina (mother) and Martin (father), and has three siblings (two brothers and one sister). â€¨â€¨On 29 August 2012 she was found in a tree, stuck between two branches. As she was trying to get out, she broke both bones in her left hind leg. She was taken to Phalaborwa Animal Clinic on the same day to secure her leg. Unfortunately the wound got infected and she was taken to Onderstepoort Veterinary Academic Hospital on the 6th of September 2012 where the veterinarians implanted a pin alongside the fractured bone.

She was kept in Pretoria for regular visits to Onderstepoort Veterinary Academic Hospital and returned to HESC on 21 September 2012 where she was kept in quarantine until 21 January 2013.

During this period she was taken to Provet in Hoedspruit for wound cleaning and bandage changing. Mary Jane was taken back to Onderstepoort Veterinary Academic Hospital on 21 January 2013 for the pin to be removed and stayed in Pretoria again until 30 January 2013 for regular check-ups. Following her return to HESC, she was still kept in quarantine before being moved to a bigger enclosure where she could move more freely, enhancing the muscle and bone growth.

Mary Jane is still in the same enclosure and is doing exceptionally well – almost fully recovered and practically no sign of the injury. Â She is running around and playing as if nothing ever happened.

We are all profoundly happy!