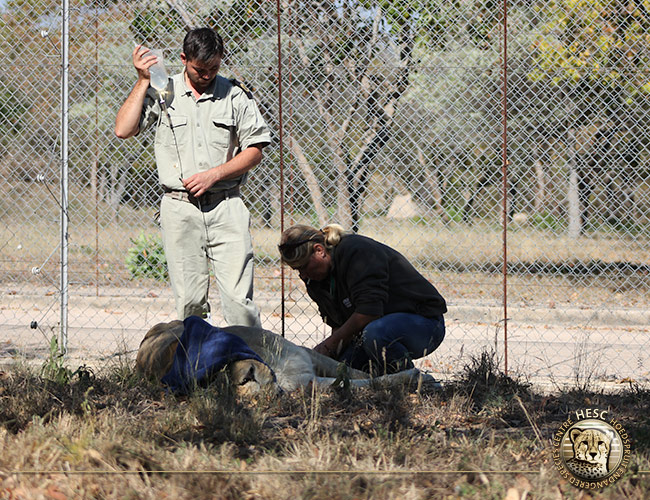 On 11 June 2015, Dr. Rogers came in to administer another round of vitamin and anti-inflammatory shots to the ailing Animal Defenders International (ADI) lion Caesar.
Caesar and Sarah were kept overnight in the feeding enclosure, where Caesar was darted before being released back into his enclosure. Caesar was darted with a drug called BAM (Butorphanol; Azaperone and Medetomidine), which has been said to be safer for older animals.
The medication administered to Caesar was given in doses lower than the norm to ensure that he didn’t react negatively, as it was the first time he was given these specific drugs.
Dr. Rogers and his team were quick and efficient. The old lion was soon back on his feet, and Sarah was able to rejoin him.
While these shots will not cure his arthritis, they will hopefully relieve some of his stiffness and pain.
We are optimistic that Caesar will still be with us for a while.

Baby Bushbuck is brought to HESC – News from our Animal Hospital

Introducing The LURE Machine at HESC