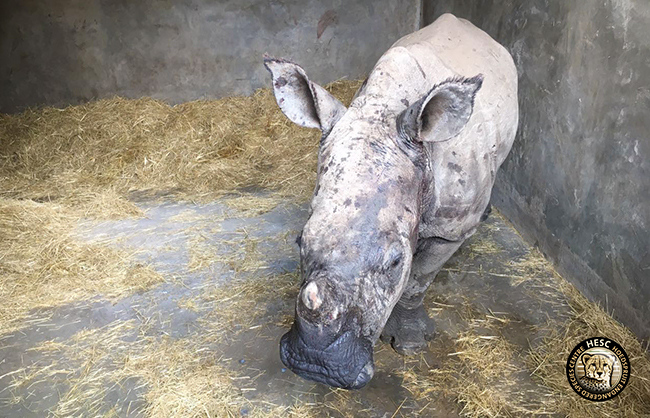 Lula when she first arrived at HESC

Lula arrived on 12 February at HESC and was placed in the boma area next door to that of the other younger rhino orphans. She was initially kept separately to give her a chance to calm down, and so she could get use to the humans tending to her. On the first night she spent with us, she was stressed (rightfully so) and did not drink the bottle of milk that was prepared for her. Fortunately, on the second night at 3am she finally took the 2 litre bottle but, instead of drinking she chewed on the teat. Trying to feed her was therefore very time consuming, but our curators were very patient with her.

It was then decided to feed her out of a bowl, which seemed to work very well. She was soon used to her feeding of 2 litres every three hours, and even started to wait at the door of her room around the times of her feeds.

Now that Lula was feeling more relaxed she started noticing all the noises around her and coming from outside her boma, especially the calls of the other young rhinos – she would even sometimes call back to them.

On the 6th night, Lula decided that it was time for her to meet the rhinos behind the calls she had been hearing. She managed to break down the door to her boma room, and was able to meet her peers through the fence. There seemed to be an air of excitement from all the other orphaned rhinos at meeting Lula, and Nhlanhla was particularly drawn to ‘the girl next door’.

Although Lula had met the other rhinos through the fence, that wasn’t enough for her as she desperately wanted to be with them. That’s when it was decided to move Nhlanhla, along with Khulula and Olivia (as Nhlanhla didn’t want to be without his ‘sisters’) in with Lula. Since then, Lula has calmed down significantly. Lula along with the other orphans will stay together until a test for TB in rhinos has been approved.