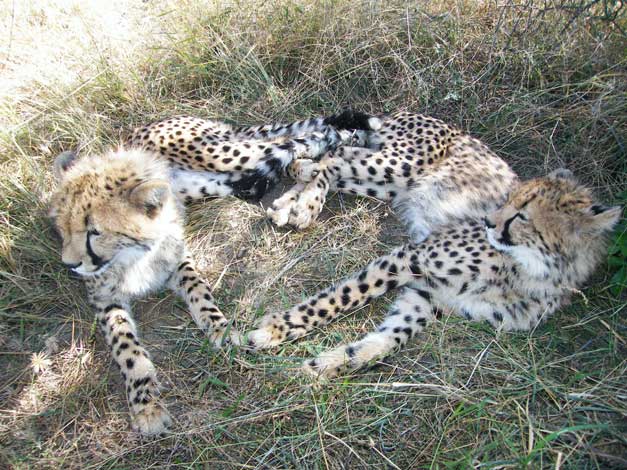 We have just three words to describe our current state of being: cold, cold and…COLD! The early mornings and evenings find us moving in slooooooow motion, although it does eventually warm up enough that the middle part of the day generally ends up being quite bearable (we still have to wear our jackets though). We realise that our winters don’t hold a candle to the likes of places like Toronto, New York or the North Pole, but you must understand that us Africans are used to spending the majority of the year in shorts and t-shirts (which is really just another way of saying we’re wusses when it comes to the cold).

To add to our winter blues, we now have to deal with “empty nest” syndrome as well.

Our four youngsters – Sheila, Crunchie, Milky Bar and Smartie – have graduated from kindergarten and moved onto greener pastures in the form of our much bigger Juvenile Camp. And boy are they enjoying this! When we first moved them they found the size of their new digs a little intimidating, but before long they were running around to their heart’s content. Now we just have to hope that the stork will pay us a visit so that our creche can once again be filled with the pitter patter of little paws.

EVERYONE NEEDS A HELPING HAND 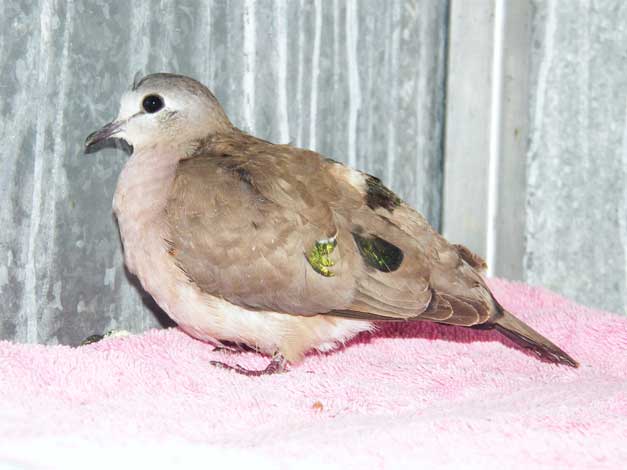 Our philosophy at HESC is that all animals deserve a helping hand, regardless of how big or small they are. The other day Christo found a young Emerald-spotted Wood Dove waddling around in front of the hospital. His left wing was trailing a bit so Christo immediately took him inside to see if he could help the injured bird. We’re keeping our newest resident under close observation and will keep you posted as to his progress.

We’d like to offer a warm welcome to our newest guide, Ruan Reyneke. The poor guy experienced a birth of fire in his first week on the job. He was tasked with taking his first tour group out and set off to Henk’s vehicle (with us watching from above). He duly climbed inside, put the clutch in, making sure to keep his other foot pressed firmly on the brake, and turned the key in the ignition.

“Wait for the coil to disappear,” whispered Bertus helpfully as he left with his own group of visitors.

Poor Ruan was in such a state of panic about taking out his first tour group that he’d totally forgotten about the “wait for the coil on the dashboard to disappear” rule. He thought it was something underneath the vehicle and went to investigate. All we could see was his rear end sticking out as he went in search of whatever was causing the problem.

Henk, who is well known for taking fastidious care of his vehicle, was shaking his head in a state of panic while muttering, “My car, my car, my car…”.

Eventually he couldn’t take it anymore and ran down to help poor Ruan. Needless to say the vehicle started first time. He then swtiched it off again and let a very red-faced Ruan have another go. Like a champ, our new guide managed to start it on his first try too. But then he forgot to take it out of gear before letting his foot off the clutch, so the vehicle lurched and stalled. This had us in hysterics, but the poor guests looked absolutely terrified. No doubt they were wondering what would happen if the vehicle stalled in the middle of the cheetah camp. One thing is for sure though, Ruan won’t ever forget about the coil on the dashboard again. By the way, the guests reported that they thoroughly enjoyed the tour in spite of the shaky start. So all’s well that ends well.

We had our first photo excursion this week. German photographers and a film crew from Chile came to film our wild dogs, cheetah cubs and vultures for a popular breakfast show on Channel 13. The cold weather has kept the kids holed up in their warm classrooms however, so as a result we’ve had no school groups visit us this past week. Apparently we’re not the only wusses! 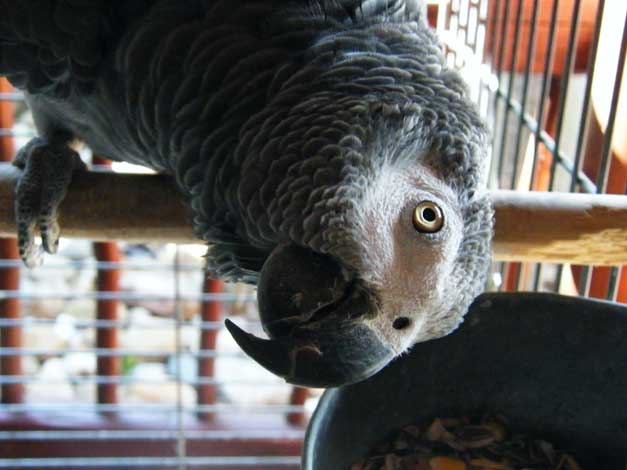 The Centre’s resident squirrels have taken to stealing Koos’s food! And they’re not even shy about it either. The cheeky (excuse the pun) little critters just hop into his cage, make themselves comfy on his perch, and then tuck into his food. It’s like Goldilocks and the three bears, except the bears are home!Â Our poor parrot is so flabbergasted by these brazen thieves that all he does is sit and watch them.

Why do we keep wild dogs at HESC?