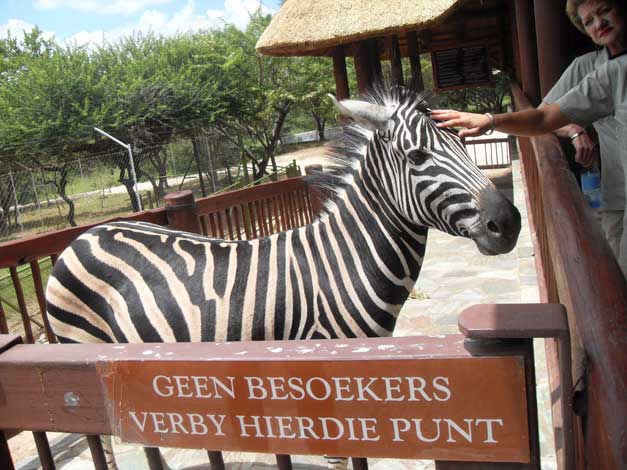 Last week was full of fun and games. Zeta made an artful escape, Koos developed a dislike for the cabinet his cage stands on, and we met a duiker with a taste for the bizarre. We also had 21 learners from the Christian Academy come to visit, and welcomed two new guides to the HESC family. You’ll hear more about Henk Labuschagne and Coenraad Oosthuizen as soon as we can coax them in from the field long enough for an interview and photo shoot.

We’re planning to release two cheetahs and a caracal on the Kapama Game Reserve in March. We’ll keep you posted as to exactly where and when this will be happening.

The February students found a tiny (about 5 cm wide) leopard tortoise in their camp. When one of the guests noticed the new addition, he asked, “Is dit â€˜n langs die straat skilpad?” Translation: Is that a ‘side of the road’ tortoise? He was referring to South Africa’s smallest tortoise: the Speckled padloper (road walker).

Koos the parrot – who holds court outside the Deli – used to have the habit of swinging around his wooden branch, but then a broken foot put a stop to his acrobatics. Recently we noticed that he’s taken to hanging down from the bottom of his cage, swinging around, and then biting the cabinet that his cage sits on. We’re not sure if he’s taken a sudden dislike to the cabinet, or if he’s merely using it to sharpen his beak.

Our wild dog pack spent the week vying for the coveted alpha male position, although to date the position has yet to be usurped from the current leader.

Zeta – our infamous zebra – is well-known for kicking vehicles, biting and kicking the guides, and has even been known to try (unsuccessfully) and unleash her unruly temperament on unsuspecting tourists. Zeta is not all bad though, she just has her moments. 😉

The other day she somehow found her way into the front entrance of the Centre. She really lapped up all the attention she received from the guides and our curator, as they all tried in vain to get her back into her enclosure. They tried calling her, luring her with leaves, and even offered her a scrumptious apple, but all to no avail as she refused to budge.

But this stubborn zebra hadn’t banked on Christo, who in a stroke of genius remembered that while she may be tame on some levels, she is still a wild animal with natural instincts. And in the wild when one zebra starts running, its herd members will immediately follow suit. Zeta sees us humans as her herd, so when Christo started running, she ran straight after him. She followed him right down to the visitors area, through the gate, and back into the centre. Not only was Zeta outwitted, but she also went unrewarded, as Koos ended up with the apple.

When you think of a duiker, you probably picture a sweet and innocent antelope, nibbling away at the grass. Its doe eyes darting to and fro, as it keeps a constant look out for predators.

Allow us to paint another picture for you. Imagine this same antelope chewing away on some rotten meat. Not quite what you were expecting right? Well recently we found a duiker in our vulture restaurant. While definitely not the kind of animal you would imagine to find alongside a bunch of vultures, most herbivores are actually known to suck the bones of deceased animals in order to obtain more calcium. Although it has to be said, this buck is the only herbivore we’ve ever seen to actually eat meat!

A celebrity comes to visit!