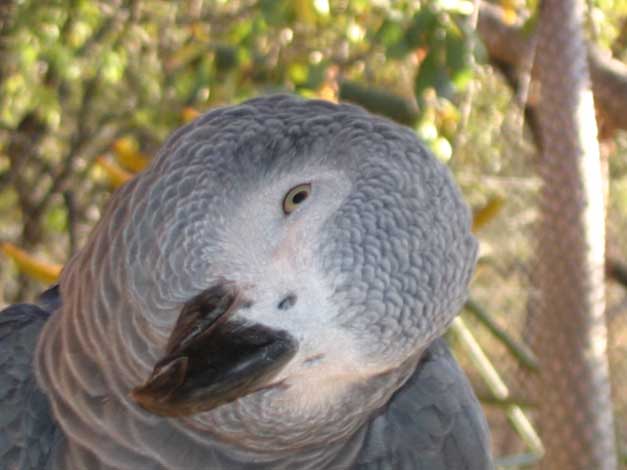 A quizzical Koos eyes out his visitor

Last week wasn’t nearly as exciting as the one before, but then that’s not altogether a bad thing. Sometimes it’s nice to be able to just amble along in the slow lane, have time to stop and smell the flowers. We enjoyed a good bout of rain, with 30mm falling in one night! There’s also been a telltale nip in the air in the early mornings and late evenings. But maybe if we don’t actually say the “W” word out loud, it will stay away a while longer. You never know, it’s worth a try don’t you think?

We bid a fond farewell to three staff members at the end of the month. Cecile Burger andÂ Denyse and Werdy Malherbe are all leaving in search of greener pastures. We wish them everything of the best in their new endeavours.

A Dark-capped Bulbul has taken to visiting Koos the parrot. We’re not sure what it is that has him so intrigued, as he doesn’t eat Koos’s food or anything. He’ll often just fly in, sit around for a moment, and then leave again. And being a typical African Grey, Koos just turns his head quizzically from side to side, not quite sure what to make of this strange visitor.

Our alpha male had a rough couple of days fighting to keep his crown as leader of the wild dog pack. Six of the younger dogs attacked him at once, scarring his face and biting the tip of his tail off. Left in a state of chaos, and with no order or authority, the dogs were at a loss as to how to behave. Even the alpha female seemed confused, and the young males didn’t help matters as they tried to gain favour by lying next to her and nuzzling her with their muzzles. Orion, the original alpha male just watched from a distance as the rebels took their chances with his lady.

But we’re happy to report that the dust has finally settled. We’ve seen him lying with the alpha female again, which is a sure sign that he’s – for the time being anyway – still the pack’s “top dog”.Â And in case you’re wondering, the reason we call him Orion is because he hasÂ three white spots on his right hind leg that resemble Orion’s belt.

Bubbles, the serval kitten, finds a home with us