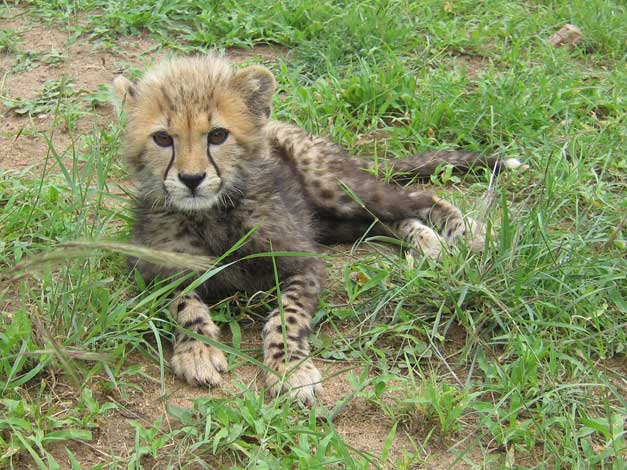 Can you believe these little guys are already six months old?

It’s still warm and humid up here, although chilly winds in the mornings and evenings whisper softly of colder times ahead. The bush is a riot of greenery at this time of the year, that said, in a month or two all this flamboyance will have to make way for a dreary brown, yet needed, winter.

Can you believe the cheetah cubs we welcomed ‘just the other day’ are already six months old. Eddy the caracal just celebrated his first birthday. The Sable antelope calf is about a year and three months old, and we suspect that the female might be pregnant again. And finally, our Nyala calves are also growing up. Times passes by so quickly, before we know it all out babies will have left the nest.

We recently opened our doors to a female serval from Hendriena. She was found lying beside her dying mother, who had gotten caught in a snare. We’ve kept the youngster in quarantine in our animal hospital for a while just to make sure she’s okay, but we’ll be moving her to a new enclosure soon.

Our rangers jumped in and gave our Education Centre a much needed make-over, and the result is quite spectacular! Now we can continue to educate learners and visitors in style.

News from the vet

We are in the process of upgrading our animal hospital so that its more in keeping with the world class research we’re currently conducting. This self-same research has led us to develop a new and improved supplement, which we are clinically testing. Hopefully we’ll be in a position to report back with positive test results in the not too distant future.

An update on Bubbles the Serval by assistant curator Karien Smit