Things have been busier than usual up here, which is why we’ve been a little slow with bringing you updates. On the plus side, it does mean that this update is a long one. So get yourself a cuppa and enjoy. Very chilly mornings and evenings are causing even the hardiest among us to put on our jackets! We also had some rain this week, although nothing as heavy as what they experienced in Gauteng recently. HESC would like to say a big thank you to G&H Transport for their generous donations (especially for the veterinarian department), as well as for adopting Khula. We also offer a hearty welcome to new guide Wiaan de Lange. 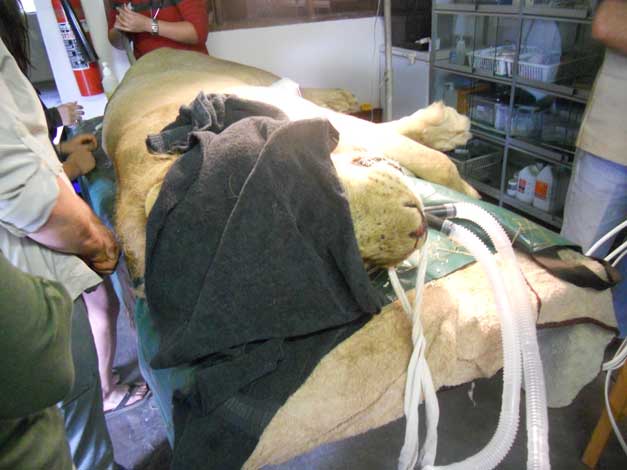 The lion getting treated

At the end of May we received a male lion (approximately four years of age) that had been caught in a snare. In his bid to escape he broke both canines on his left side and also bit off the tip of his tail. We had a surgeon give him root canal treatment and amputate his tail. His paw, which was also injured, has healed very well. We kept him in quarantine until the 10thof June and then transported him to a well known reserve in Hoedspruit. He’ll stay there in a boma until he heals completely, and thereafter he’ll be released back into the wild. 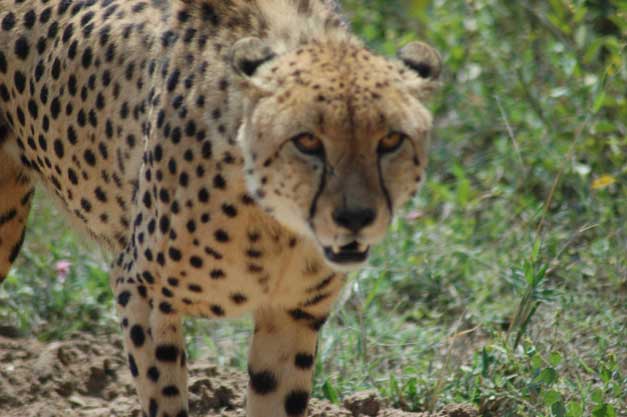 Habana and Khula, the two cheetahs that were released early last year and then subsequently brough back to the Centre are both doing well. Habana was the first to be brought back after a broken ankle left him unable to hunt. His ankle has healed nicely, but unfortunately it will never return to normal so we won’t be able to re-release him back into the wild. He was very aggressive when he first got back to HESC, but he’s a lot more relaxed now.

Khula – the hand-reared cheetah – missed the company of his human family too much, so in the end he came back as well. He does get to stretch his legs every afternoon though, and is also loving all the attention he get gets from the staff and visitors. This popular fellow was adopted recently.

Last week Saturday Toffee, one of our female cheetahs, gave birth to two cubs. Sadly one of them was dead and the other barely alive. We immediately put the little guy on the Bair hugger machine which we were very fortunate to have donated to us (you can read more about it in our June Newsletter). The vibration of the machine simulates the mother’s heartbeat and is therefore excellent for treating newborns. We also spun some blood and injected it under the cub’s skin in order to get some white blood cells into its system as it wasn’t able to suckle immediately. Unfortunately the second cub didn’t make it either, and passed away on Thursday night. 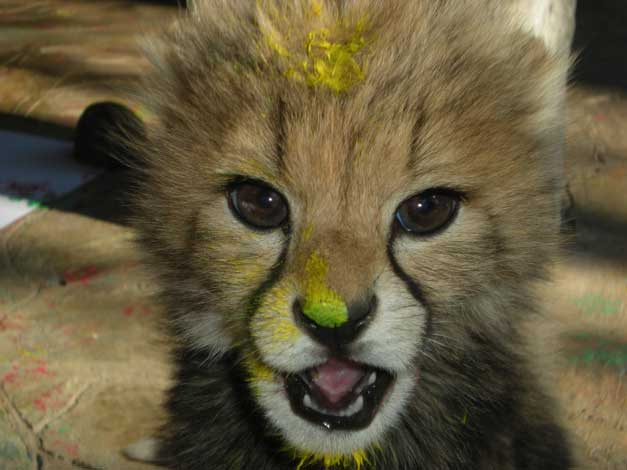 One of Tilla’s artistic offspring

On a happier note Tilla’s cubs, who are now about two months old, are not only doing well, but are also proving to be talented artists. We often let our youngsters paint and then sell these works of art in our Curio Shop. And so HESC’s legacy for creating artists continues: first Max, then Sheila and her mates, and now our darling newÂ cubs. We certainly enjoyed watching these naturals show off their talents as they effortlessly “painted” the crisp sheets of paper we laid down for them. Of course, getting their paws full of paint wasn’t enough for these rambunctious youngsters, they had to get their faces full of paint as well. They have yet to be named, so any suggestions would be most welcome. 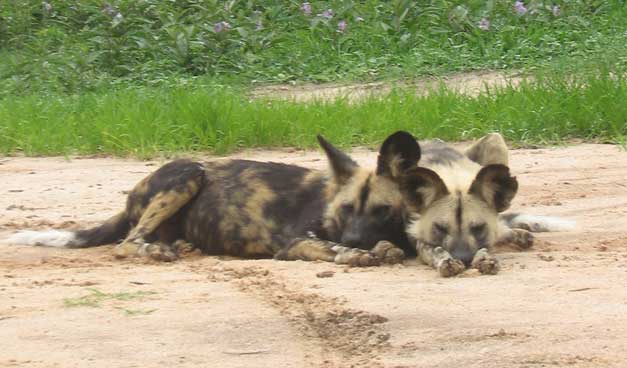 Look how sweet they are…perfect for adopting!

We currently have four wild dogs that have been adopted. Our alpha male and female, thirteen pack dogs, and an unknown amount of pups are still available for adoption. If you’re interested in adopting one, please feel free to contact the Centre for more information.

WHAT THE KIDS SAY

On a recent school tour a six year old girl gazed up at guide Henk with Bambi eyes and asked, “Can I hold your hand?”

Only two schools were brave enough to visit during what must surely be the coldest week we’ve had so far. Hoedspruit pre-primary arrived with 50 children, while Duiwelskloof pre-primary brough an equally impressive 41 youngsters to meet our animals.

NEWS FROM THE EVER ENTERTAINING KOOS 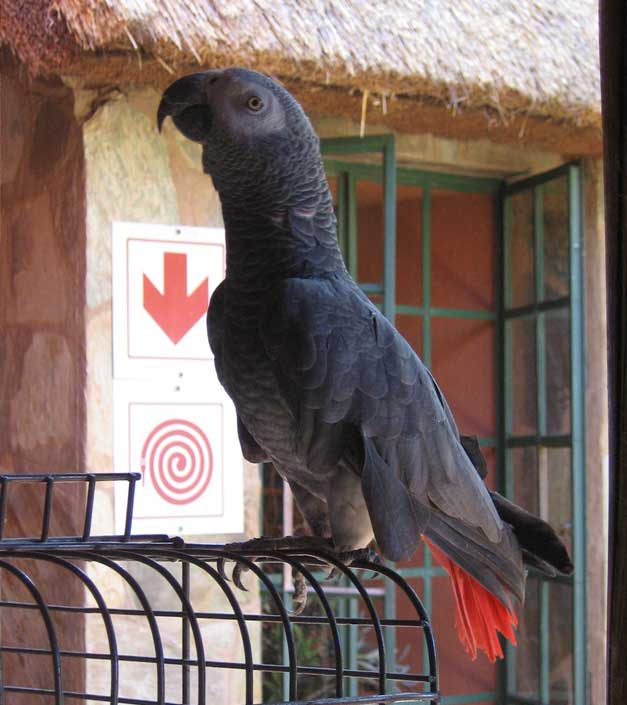 It seems we have finally settled into a workable routine with this middle aged parrot. Coaxing him back into his cage at the end of the day used to be a big story. So much so, that even his usually favourite people had a battle trying to convince him that it was time to say goodnight.

One day an oversight occurred and he was temporarily forgotten outside. Although we did eventually remember, it was clearly long enough to have given him a bit of a fright, because ever since then we’ve had no problem at all getting him into his cage at night. Every afternoon when he sees us packing up he’ll call in a distressed tone, lest we forget about him a second time. Now the minute he sees the blanket we use to cover his cage he literally dives through his cage door. Trudie (his principle caretaker) is understandably relieved at the new turn of events.