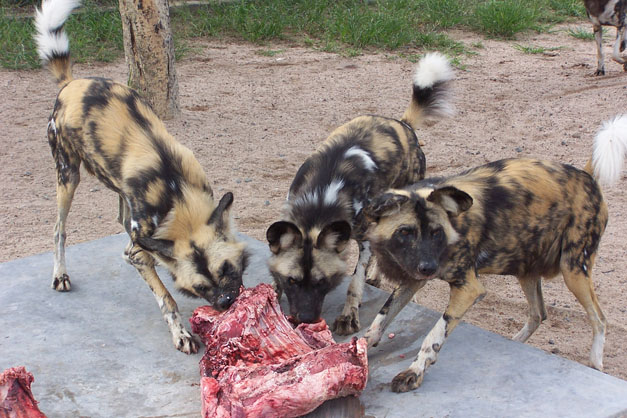 In the Wild Dog enclosure each day begins with a greeting ceremony. As soon as they hear the familiar growling of my bakkie’s diesel engine, the dogs fill the morning air with their excited chirps, whining, whimpering, squeaks, chatter, growls and howls.

They run shoulder to shoulder, leaping and diving over and under one another to see who can reach the bakkie first.

Calling to me as they go, as if searching for that all important member of their pack…

The dogs are very demonstrative and take great pleasure in ‘kissing’ each other. They lick and poke at the corners of their mouths and urinate liberally at the anticipation of their meal.

The smell is something to behold, but I’m quickly distracted by their excitement, which is infectious.

This is their food-begging behaviour. It plays an important role within the hierarchy of their social structure, and is also part of the pack’s bonding ritual.

The play fighting and jumping around only serves to exacerbate their already heightened energy levels, but within seconds of throwing the meat down for them I find myself engulfed in silence.

All I can hear is the satisfactory smacking of chops and cracking of bones as they set to work on their breakfast.

The silence is short-lived however, because before long the chasing starts and they’re whining, jumping and begging from one another as if to say, â€œGive me a piece, share with me, PLEASE!

The Latin name for wild dogs is, Lycaon Pictus, which means ‘colourful wolf’.

This is mostly likely due to the unique and richly mottled patterns of white, yellow, brown and black, which all blur into one as they run.

Wild dogs are expert hunters that rely heavily on teamwork to catch their prey. They can reach speeds of up to 60km per hour for short stretches at a time, making them one of the most efficient predators, with a success rate of between 80% and 90%.

Unfortunately human over-population, loss of their natural habitat, hunting and outbreaks of viral diseases such as rabies, distemper and parvovirus, are all contributing to the sharp decline in numbers of this incredible species.

HESC does everything within its power to protect them while at the centre, but they have no control over what happens to these animals out in the wild.

Competition in the form of larger carnivores such the lion and spotted hyena is rife, because they rely on the same prey.