Today is World Rhino Day 2018.  A day that the plight of the rhino is once again highlighted through the strength of social media, such as Facebook, Instagram and Twitter.
The heartbreaking story of Ronnie and Lahliwe stretches much further back, before the era of social media, whereby now (fortunately), the world has been made aware of the war many of us are fighting to keep the rhino species in existence.
Our long journey with rhino’s started in 1991, with a rhino called Ronnie, who was the very first rhino of many, that we had the honour of rehabilitating at HESC.


Ronnie came from a safari park in Wales. The owner of the park made arrangements to transport Ronnie to South Africa, to be in his natural environment, where the weather is more suited to a rhino’s skin. His skin was in very bad condition, that we assumed was due to the different climate in Wales, and the lack of sun.

Ronnie landed in Johannesburg on his first birthday, and was personally welcomed by Lente and her late husband, Johann Roode. He adapted to his new life at HESC well, and with the right treatments for his skin, and lots of love, it was not long before he was in a good state of health, and soon became accustomed to his new family and our beautiful African sunshine.


He grew to become a strapping young rhino and so, our team decided that he needed a mate. In October 1992, Lahliwe, a young rhino from the KZN Umfolozi Reserve who had been rejected by her mother, joined Ronnie.

It didn’t take long for the pair to become inseparable, and with time, it was decided that these two rhinos were to be released into our neighbouring reserve. It gave us overwhelming pleasure, to see them in the wild together, and they adapted very well.
But it was short-lived. To this day, this has been the hardest event in HESC’s almost thirty years of operations.  Ronnie arrived back at our gates at HESC, his horn hacked off and three bullet wounds in his body. He had walked all the way to us at HESC from the scene of a rhino poaching attack. We were horrified. Shortly after, we discovered Lahliwe’s mutilated body, already dead. 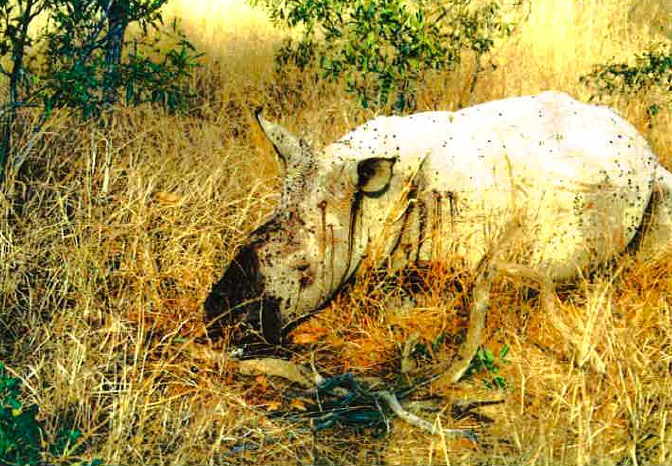 After years of physical, emotional and financial investment, both Ronnie and Lahliwe were brutally shot with an AK47 rifle – Lahliwe nine times, and Ronnie three. Lahliwe’s small horn, hardly visible, was sawed off. She died instantly. Ronnie somehow, managed to walk all the way back to HESC, to his place of safety, and died days later in the hut he had been nurtured in as a baby.

The loss of these two innocent rhino’s hit us hard, and Lente Roode and many of the longstanding staff, still to this day tear up when they speak of Ronnie.
Over the past two weeks we have shared the stories of the rhinos at HESC that have all touched many people’s hearts, ours most of all, and for good reason.
It is our deep rooted passion to protect and save every rhino we can. For all the Ronnie’s and Lahliwe’s out there, who have lost their lives to this barbaric and senseless killings. All for a wedge of USELESS KERATIN, which is the saddest part of it all.
Lente and Adine would like to take this opportunity on World Rhino Day to say thank you to our team of staff, who work so hard, every day, in caring night and day for the rhino’s. It is a tougher job than most people realise. THANK YOU.
Happy World Rhino Day
#Together4Rhinos
The HESC Management

Rescued Rhino, Esme, goes from Strength to Strength at HESC.